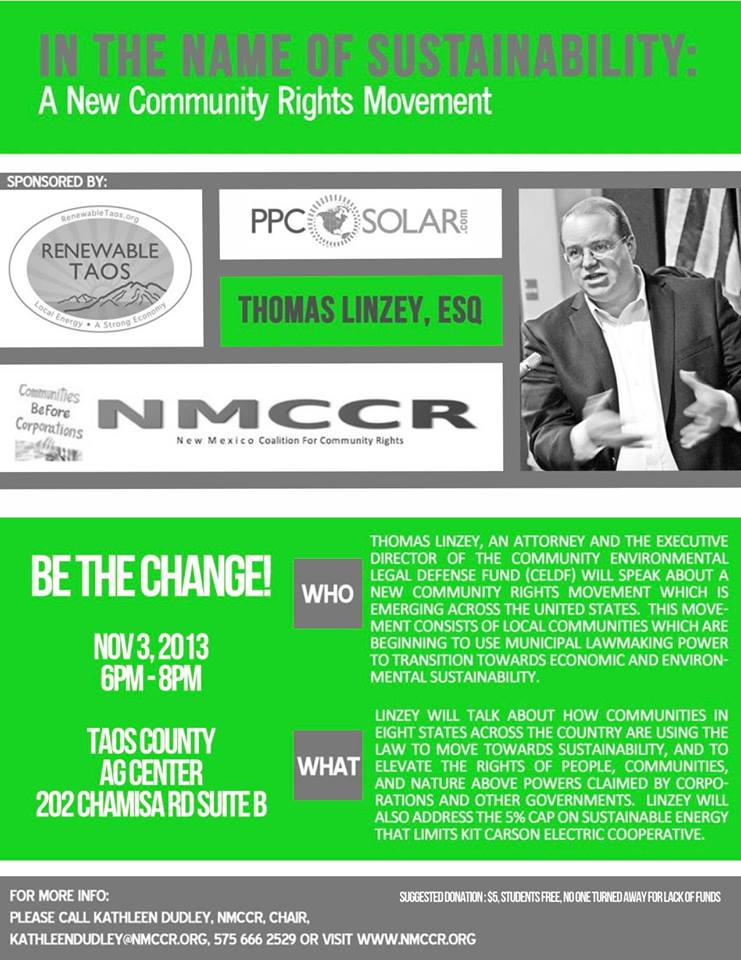 The first event hosted Thomas Linzey, attorney with the Community Environmental Legal Defense Fund (CELDF), was sponsored by RT along with Paradise Power Company (PPC), and the New Mexico Coalition for Community Rights (NMCCR). Sponsor PPC Solar was recently awarded 86th out of the top 250 solar companies in the United States by Solar Power World and are soon to open a net zero energy building in Taos.

On November 3rd at the Taos AG Center, Thomas Linzey, ESQ spoke about community rights ordinances like the Mora County ordinance, which bans hydrocarbon extraction. The ordinance generated national headlines and graced the cover of the Los Angles Times as Mora is the first county in the United States to ban fracking. Just a few days ago, Lafayette, Colorado and Oberlin, Ohio both passed a Community Bill of Rights with over 70% support despite an expensive fossil fuel campaign against it.

Linzey’s approach is controversial as he states it, and sets a trap for state and federal law to be exposed as favorable to corporations. He intends to galvanize communities to this exposure, before they realize they can’t do anything to stop corporations. Codified laws including corporate personhood, Dillon’s Rule, and the Interstate Commerce Clause, were discussed in his presentation. Those familiar with Move to Amend’s work to alter the constitution find a sympathetic supporter in Linzey.

According to Think Progress.Org, “Less than a year after the Colorado oil and gas industry’s trade association sued the city of Longmont over a similar ban on fracking, and only a few months after the state government run by Gov. John Hickenlooper joined the association suing that city, activists in four communities in Colorado are pressing ahead with ballot initiatives that would ban or impose moratoria on drilling and fracking.”

Linzey himself has given up on state and federal policy, and essentially describes his tactics as “revolt” against existing law. He is disliked, and a frequent victim of smear campaigns both directly and indirectly by the oil and gas lobby. Robin Collier of Taos recently stated, “As far as I know, none of CELDF’s ordinances have ever been upheld in court or ever actually stopped any fracking.”  New Mexico Environmental Law Firm, executive director Douglas Meiklejohn has confirmed they will defend the ordinance in Mora, if it is challenged.

NMCCR and CELDF held a symposium on Saturday in Santa Fe where folks from all over the state came to the Farmers Market looking for solutions to existing damage, for instance, at the Kirtland Air Force Base jet fuel spill, or those who want to build impediments for future extraction of water in places like Catron County. Diverse representatives in terms of age and race from 15 counties, including municipalities like Estancia, Counselor, Las Vegas and Albuquerque attended. Former Santa Fe County Commissioner Harry Montoya attended, as well as Mora County Commissioner John Olivas. Olivas and Kathleen Dudley of NMCCR participated in both events, and a third in Las Vegas. Olivas, Dudley and many others worked to get the ordinance in Mora County passed.

Linzey fully understands the impediments at regulatory levels, and is an advocate for local control as corporations are always poised to use preemption, (such as the bill introduced by NM State Carlos Cisneros after Mora county banned fracking), centralization, and privatization. Linzey practiced environmental law attempting to prevent degradation by challenging permits issued by states. He describes a system that never stops corporate destruction as they have literally written the regulations.

For a full understanding of this complicated problem, watch the video here. 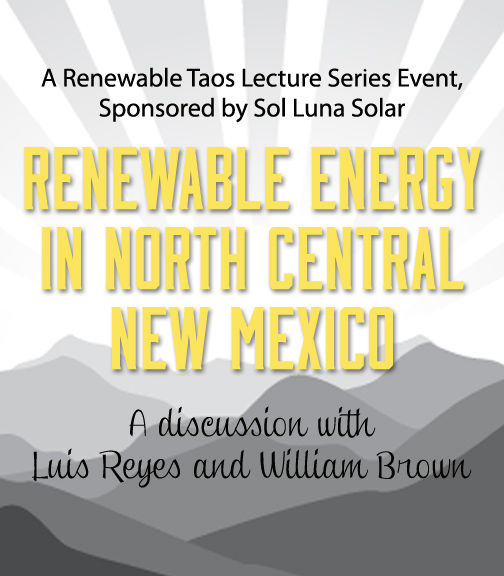 The event at KTAOS on November 7th opened with an introduction of members of RT and a brief on contributions they have lent the community, given by Mary Emery. She described the resolutions recently passed at both the Town of Taos and County calling for more renewable energy. The approach is primarily reformist, advocated by elected officials like the Mayor of Taos and Federal Representatives and contrasts dramatically Linzey’s approach that attempts to write in Ordinances to break free, at a community level, from the existing structure of law and regulation.

Mark Johnson VP of Sol Luna described the accomplishments of his company and thanked RT and organizers of the event. His construction company, Los Ebanistas, is building nearly net zero homes. He is hoping to see the day when all public construction requires renewable energy that save money and reduce carbon emissions. He mentioned Luis Reyes of KCEC, who was recently awarded Utility of the Year by the Solar Electric Power Association. Nicole Koontz, Regional Sales Manager of Canadian Solar, was introduced and her discussion about the manufacturing of photovoltaic panels and mostly business topics, might have been better left to an investor group or trade show audience, as some of the audience left.

The crux of the discussion that followed was around the success of local renewable generation thus far and the 5% cap on it as dictated by a contract between Tri-State and KCEC. Roberta Salazar mentioned the Valle Vidal, Rio Grande del Norte National Monument, the Taos Pueblo struggle for Blue Lake, and the Columbine- Hondo Wilderness which is soon to be heard before Congress. She called for a grassroots effort in the community to enact energy change and reiterated Taos has a reputation for conservation.  The group analyzed consumption, energy conservation, keeping energy affordable, and community solar.

Reyes described a David and Goliath scenario as the contract Trustees signed with Tri-State, the lesser of several evils. Tri-State claims it needs a transmission line through the new Rio Grande del Norte National Monument to bring renewable energy here from Colorado. Bill Brown and Luis Reyes believe renewable energy should originate in Taos.  Roberta Salazar is against the transmission line and mentioned writing letters to Congress asking for support of these types of causes.  Brown says we should end building more lines, in order to bring Colorado sunshine here, and build out renewables here.

Communities can petition representatives to exempt community solar from the 5% cap, but as it is nothing will happen until 2015 at the state legislature and if Governor Martinez is reelected, she will probably veto “renewable energy” legislation. According to the moderator in private, the representative of Senator Tom Udall was, “one of the most important people in the room.” Tom Udall’s representative Michele Jaquez -Ortiz asked this writer to mention recent legislation introduced that is similar to what Udall managed to pass 10 years ago in the House of Representatives, calling for a Renewable Energy Standard. This places the effort on a long list of liberal platforms that are quickly politicized and exposed to the congressional dead end that so many of us are familiar with today.

Salazar mentioned the fact that a mix of fossil fuel extraction in this state generates revenue for public schools and may bring up problems for renewable advocates and anti fossil fuel folks alike. Brown said the contract between KCEC and Tri – State can be altered if the Rural Utility Service (RUS) at the USDA, the lending institution for Tri-State, forces it. He also said Tri-State could also change it’s obsolescent, beholden to fossil fuel interests, business plan to support local micro grids.

Reyes stated the Public Regulation Commission (PRC) is investigating whether Tri-State has violated terms of the contract allowing it to be voidable, by stating the PRC has no right to regulate them because of the interstate commerce clause. Reyes thinks our federal representatives need to get all the stakeholders in the same room in order to increase the cap from 5 to 10 or 15 percent.

Brown described how corporate energy providers send most of the money spent here on gas to out of state to holding companies in Michigan. Topics such as plutocracy and corporate rule, show up in conversation, but are not outwardly defined as such, playing back into the typical discourse we are used to that can be somewhat mundane, to those seeking change. The various possible models for local renewable generation also complicate the matter.

One important thing to consider, brought up by Brown, is that 40 percent of water withdrawal goes into fossil fuel industry, compared to 30 percent to agriculture here in New Mexico. Clean energy uses almost no water whatsoever. Brown says most policy is aligned towards fossil fuels, and analyzed the possibilities for many small systems on homes vs. larger local arrays. Reyes believes the fewer the transmission lines the better, which would be required to transmit energy from large arrays, like from Colorado, which is the crux of the argument for Tri – State’s advocacy of a line through Rio Grande del Norte. He says this should be part of any strategic models.

Almost a year after its formal inception, Renewable Taos has done much to stimulate discussion. They are looking at some models in Gallup NM, Antonito, CO, and organizing future workshops. Consider RT a local think tank, working at many levels with different stakeholders to enact tangible change.

The question remains, what will it look like, and how long will it take? Juxtaposed against nearly zero renewable generation taking place at other local utilities, impediments at state and federal levels that include well-financed corporate lobbyists, it’s an uphill battle no matter what. If Linzey’s scheme succeeds at banning fracking to protect water why can’t it do other things like demand that renewables be accessed to save the planet?

What do we do? Are community bill of rights viable or anomalies available to few places and conditions like Mora County? Will writing our congressmen, dissolving some contracts, passing some state or federal legislation, which takes a lot of organizing, do the job? Renewable Taos, whose status as a non-profit is not official, will no doubt have to dedicate resources to fundraising and management, if and when they are. Thus far, complex energy issues have already occupied the minds of 5 or more people meeting once a week for the past year.

We’re lucky in Taos to have these discussions, as they are happening in few places to this degree.