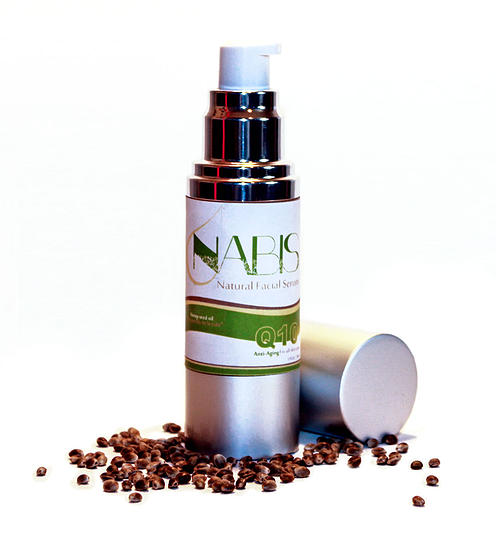 Last weekend I sat down with Montse Oyanedel Tolmo and Kristel McKanna, local creators of Nabis, to talk skin care. Now, while I may not be the most savvy of humans when it comes to personal skincare (it took me an embarrassingly long time to figure out how to properly apply eyeliner, I’ve kept my hair all one length in the staunch adamancy that if it takes more than five seconds for it to look presentable it will require something called “styling” which I want no part of, and, yes I’ve been known to wash my face with bar soap), I am not so oblivious that I am unaware of… (involuntary shudder) wrinkles.

Montse, Kristel and I talked about their passion for all-natural skin care, what makes Nabis a fuss-free easy way to keep skin hydrated in our sun-baked climated, and I finally found an answer to that age-old question: what the hell is the difference between a moisturizer and a serum?

Nabis is an all-natural facial serum that uses Hemp Seed oil as a core ingredient. Cannabis sativa, the scientific species name for hemp, is stuffed with antioxidants and essential fatty acids. Known for its anti-inflammatory and anti-aging properties, hemp seed oil is also a natural promoter of tissue regeneration. Nabis also contains Ginkgo Biloba which apparently, while keeping your brain sharp, keeps your skin taut. Hyaluronic acid protects against ultraviolet radiation — we’re full to capacity of that here in Taos — and grapefruit essential oil is a known antibacterial that soothes and cleanses irritated pores. If this list of goodies doesn’t turn you on, Nabis also, smells like roses — not fake roses, real roses!

Made right here in Taos

Monste and Kristel came up with Nabis because they wanted to do something together that would highlight their education and experience. Both ladies hail from Chile and have been living in Taos long enough to be tired of the shuffle. Montse is a chemical engineer and Kristel a graphic designer. After we discussed their over-qualifications, Kristel also chimed in with “and we LOVE cosmetics!” after which both started nodding their heads emphatically. 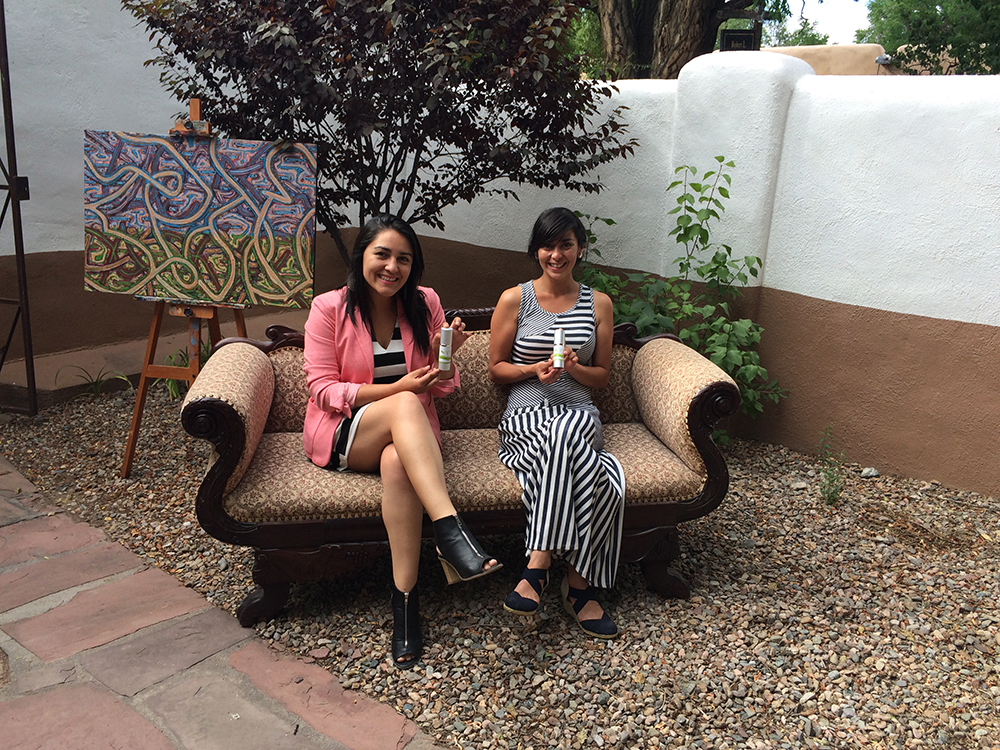 Montse and Kristel started cooking Nabis in Montse’s kitchen a little over a year ago.  It took them two months to come up with a recipe they liked. It wasn’t just about finding the right ingredients and putting them in a blender. It took them forever to perfect the texture, color, and quality. (The look on their faces as they were reflecting on those earlier experiments was classic.) Apparently disaster struck more than once, and left them with a string of oozy bubbling sludgy results that were more suitable to the experiments of a mad scientist than the next big thing revolutionary facial care.

What’s even more astounding is that after they cook this liquid facial gold, Monste and Kristel have to package it. They do with their own two tenacious and dedicated hands. Each bottle is lovingly filled, and the labels painstakingly and precisely applied. I was in awe of the sheer amount of time both of these women put into crafting Nabis to their exact standard.

It’s not like Montse and Kristel have loads of time on their hands either. The sheer fact that I’ve been attempting to schedule an interview with them since July, and we couldn’t find a time where all three of us could be in the same room at the same time until last week, is a testament to the fact that they are BUSY. Nabis is just one of the many things Montse and Kristel have going for them. Kristel works in the ski valley and around town at various hospitality jobs, travels marketing Nabis, and keeps up with her own design work. Montse co-runs Ennui Gallery on Bent St., works with UNM and the adult learning center, and teaches and tutors Spanish.

Go get yourself some

Created and crafted in Taos, you can find Nabis around town at Ennui Gallery on Bent St., Taos Herb Company, and Taos Market, and on the web nabisnaturals.com. I have to admit I was a convert to Nabis before this interview. I’ve been using it since January, and it soothes my anti-beauty regimen soul.

And now, the answer to the million-dollar question — what is the difference between a moisturizer and a serum? I’ll tell you:

A moisturizer targets one component of facial care and only penetrates the first layer of the dermis. A serum combines several active ingredients to penetrate deeper into the dermis, rejuvenating on a cellular level, protecting and moisturizing all at the same time. Montse and Kristel recommend using Nabis as a serum and then using a moisturizer for the ultimate skincare approach, but for this product-phobic girl, Nabis is more than enough for my attempts to at least keep those (involuntary shudder) wrinkles at bay.