Monks’ Ale is distinctly fruity and crisp. I appreciate a good beer, but I’m not a beer aficionado per se. But this beer, well, it’s definitely worth writing about.  Made in northern New Mexico, just outside Abiquiu, it is brewed at Benedictine Monastery Christ in the Desert.  The Abbey Beverage Company, which is operated by the monks, distributes the brews. All aspects, including brewing and hop harvesting, are directly controlled by the monks themselves, in keeping with some of the Trappist traditions from Belgium. The Benedictine monks in Abiquiu have brought this tradition to northern New Mexico as a means of self-sufficiency.  As of 2012, they were the only monastery-run brewery in the United States.

Monks have actually been brewing ales for more than a thousand years.  Often called “liquid bread,” it was a vital part of their diet, nutritious in B vitamins.  Since water was generally unsafe to drink, ales were the preferred beverage for monks and virtually everyone in Europe in order to stay well. The Trappists, like many other religious people, originally brewed beer to feed the community, in a perspective of self-sufficiency. Nowadays, Trappist breweries also brew beer to fund their works and for good causes.  Since 2005, the Christ in the Desert has been actively involved in the production of beer. 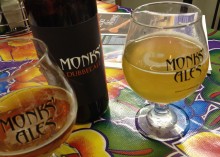 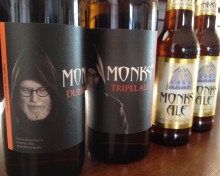 If you want to check out the Monastery, you can find it on Forest Service Road 151 near Abiquiu. The website requests you email or call a couple days in advance if you intend to visit.  It is 13 miles down the Forest Service Road along the Rio Chama, and sits in the heart of the Rio Chama Valley along the aspens and the striated cliffs. It is quite a magnificent site. The Monastery has an impressive solar array and acres of hops on the property.  It is a completely off-the-grid operation. They are cultivating native New Mexican hops for their ales as well. There you can see the monastery and the hops fields visit the bookshop and enjoy the sanctuary, but you can’t taste it there.

In Abiquiu you can get a taste of the Monks’ Ale.  Stop at Bodes, the gas station. Have a frito pie or the fish tacos with a pint. The food is great and the beer is too.  And as Monks’ slogan says, it’s made with “care and prayer” — or, as one the patrons of beer, Saint Arnold (580-640) expressed it: “From man’s work and God’s goodness, beer came into the world.”