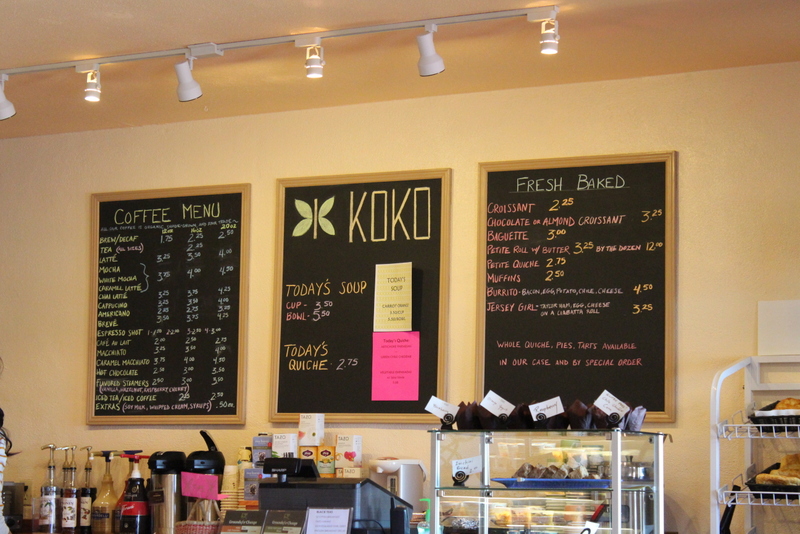 KOKO has become a staple southside stop for me since they opened this spring. Located in the same plaza as The Good Sole and Yu Garden, KOKO is owned and operated by Dianna and Kenji Sakai. The Sakais are most well-known in Taos for Nu Garden: the fresh grab-and-go sushi, deli sides, and assorted deliciousness that they’ve been supplying to Cid’s for years. Naturally it would be absurd (albeit hilarious) to open a place called Nu Garden right next to a place called Yu Garden, so when they decided to open their own freestanding Coffee, Deli, and Carry-out this year, they settled on the name KOKO — a Japanese word that means “here.”

When Dianna and Kenji began Nu Garden with their son over 14 years ago, they started with grab-and-go sushi (Kenji is Japanese) and never really expected it to grow from there. But over time, they expanded to serve the demand — as other businesses closed, or stopped supplying Cid’s with certain pre-made items (fruit pies, sandwiches, you name it), Nu Garden stepped up and began making them.

As you may or may not know, Cid’s is now putting in their own kitchen, and will begin producing their own grab-and-go foods; the Sakais took this as an opportunity to set off on their own. They decided to fill the need for fresh, fast food on the south side of town, settling on a spot that has been a bit of a revolving door of business for the past few years. But KOKO, I’m confident, is here to stay. They still make just about everything themselves at a kitchen just down the road, and they haven’t lost an ounce of the signature fresh quality that Nu Garden is so well known for.

Dianna is originally from New Jersey, where you really can’t throw a stone without hitting some kind of deli-style “variety” food store. She wanted to bring that kind of eclectic energy to Taos, and it’s delightful to see the colorful array behind the counter each day. The usual suspects include deli-style salads (I’m still dreaming about the kale salad I had there last week), sandwiches, and quiches; but I’ve also seen fish cakes, lasagna, and even chicken saltimbocca back there on any given day. And that’s on top of their famous sushi, a great assortment of pastries, and truly fantastic (fair-trade, organic) coffee.

They strive to use really high-quality ingredients, including a 100% commitment to using organic rice in their sushi. Some of what’s there is grab-and-go, some is portioned and sold by the pound — but it’s all fast, fresh, and delicious, and comes with extremely friendly service (no small feat in Taos, as we all know). They’re working towards having a full catering menu, so keep an eye out for that — as a personal endorsement, I’ve already hired them once to cater a series of small meetings, and will do so again in a heartbeat.

Earlier this week, I stopped into KOKO for a cup of coffee before a morning radio date with Michael Dean. Standing at the counter when I walked in was Leatherworks owner Kristian Moore, who was headed to the very same radio date. We live at opposite ends of town and hadn’t discussed a KOKO rendezvous in advance, but there we both were. I wasn’t surprised — we’re both particular about our coffee, and KOKO has the best coffee south of the World Cup — but I was pleased. After all, in Taos, when you run accidentally into longtime locals in a brand-new place, it’s usually a pretty good sign that the joint (be it a bookstore, gallery, or deli/carry-out/coffee shop) is doing something absolutely right.