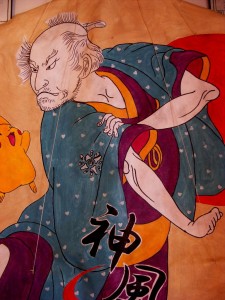 “I rarely give interviews,” Sheila Guzman tells me plaintively as she sits across from me in her darkened, recently-opened restaurant, Hero.

I’ve no problem believing her, as she seems the sort of person that doesn’t mince words or suffer fools lightly.

However, behind her stoic demeanor, a bright light twinkles in her eye, the look of someone that’s seen things from both sides, a look that says both “yes,” and “no,” simultaneously.

At 62, she’s fit and full of life — quite an accomplishment for a multi-decade line cook, as restaurants are notorious for breaking one’s body and soul down, creating a type of cynicism that comes from seeing a flood of humanity come in and out of their doors, all expecting something.

Guzman has navigated that experience with a healthy dose of self-introspection and soul-searching, the proof of that journey emblazoned across the top of her menu, which also serves the title of this article, “Be Hero Now.”

The statement comes from the 70’s tome on spirituality Be Here Now from Ram Dass, the guru who came to popularity under the guidance of Indian holy man Neem Karoli Baba and inspired the opening of the local Hanuman Temple. 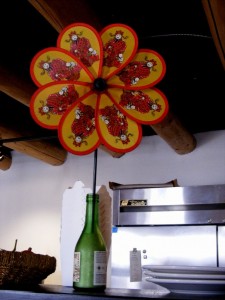 “What’s spirituality and gurus got to do with food?” you ask, and it’s a valid question. To find the answer, one needn’t look any further than the pages of “Be Here Now,” the story of how Ram Dass (aka Dr. Richard Alpert, PhD) journeys through India on a quest for a spiritual master in the 60’s and somehow ends up in the presence of “the Maharaji,” Neem Karoli Baba, spending several months observing and analyzing him from every angle.

Maharaji slowly breaks Alpert down over the ensuing weeks through merely being himself, letting Alpert wrestle with his own doubts and fears. And then, one day in the high mountains of the Himalaya, an attendant comes to Alpert and says, “Maharaji wants to see you,” so he goes for his private audience with him. Maharaji looks at him and simply says,

“You make many people laugh in America?”

“Good,” Maharaji replies, adding, “You like to feed children?”

At that, Maharaji leans forward and taps him lightly on the forehead three times, transferring what’s known in Hindi spiritual terms as shaktipat, a sudden bolt of spiritual insight that overrides mental activity, cutting straight to the heart. 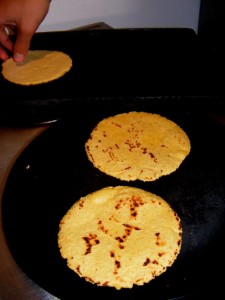 The act inexplicably brings him to tears, breaking him down to a child-like state, and attendants have to carry him outside. Dr. Richard Alpert, as he’d been known, ceased to exist at that moment and Ram Dass was born.

The seminal point in this recounting is the simplicity of the interaction and line of questioning Neem Karoli offers Alpert: “Do you like to feed children?” There’s no holy grail to be offered, no intense repeating of mantrams or other spiritual claptrap, just the simple reminder of our humanity as a necessary corollary to spirituality. In other words, it’s the basics, the day to day mundanity that truly matters and serves as the groundwork for our spiritual aspirations.

Guzman understands this, and that philosophy is what underlies Hero: It’s simple, yet elegant, decorative, yet thrifty.

Nowhere is this more evident than in the hand-made tortillas she produces. The tortilla is almost a comically simple thing, yet many try to produce them with disastrous results. At the core of the perfect tortilla are the basic elements of ground corn, water, and perhaps some salt. It’s the combination of the three in perfect unison that makes the concoction spin. It’s not merely a blending exercise, but a tactile one. Presence of mind and experience are what guide the process. 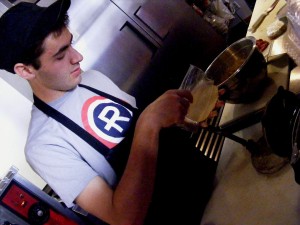 Guzman brings the right level of awareness and experience to the endeavor, and in fact to the entire menu at Hero.

Despite her successful career and years in the kitchen, she remains focused on the basics. “I consider myself a great cook,” she tells me as we discuss the current American trend of Chef Worship. “I’m pretty much self-taught, self-created,” she adds. “I’ve never really understood the adulation some chefs get. It seems to be ego-centered to me.”

“I’m basically a very experienced line cook,” she almost sheepishly adds. “For me, there’s nothing better than when the kitchen is operating on that non-verbal level, where we’re anticipating each others moves. That dance is what’s always inspired me.” 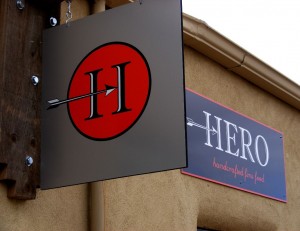 Her previous restaurants have always precipitated the popular trends in American cuisine, and now it seems Hero is the stripped-down, leaner culmination of those places. It’s a bold move for Guzman, though, opening a spot downtown. She’s a fringe person — the consummate Taoseña, and therefore loves her personal space.

The genius of Hero lies in its coming together of location, price point, and low overhead. “I wanted it to be simple,” Guzman tells me. “I’ve never made a ton of money, but I make enough to live on,” she off-handedly tells me, as a group of tourists take a look at the menu on the door and then move on. I point out the fact they didn’t really seem interested in Hero and she sighs and says, “Ninety percent of people are adventurous . . . the others are looking for what they’re used to . . . and that’s fine. They probably won’t find that here, though.”

What will you find at Hero? What Guzman refers to as “handcrafted fine food.” However, I’d go further and say that what one can find is the perfect mix of East meets West, blue collar and exotic, offering such staples as the Lunch Box Tuna Salad sandwich, or the Plain Jane that’s simply ham or turkey and cheese, served either hot or cold with your choice of bread, but focused on qualitative ingredients and presented in a well-thought-out manner.

In addition to the simplicity of the aforementioned sandwiches, there’s the more exotic Gochujang Meatballs, ground beef seasoned with Korean chili paste, scallion, garlic, and ginger on a crusty roll with apricot hoisin aioli and sesame slaw. The incomparable Freckle Face Strawberry sandwich is a perfect coming together of Brie, smoked turkey, red chile jam, fresh basil, and strawberries pressed on French bread, the result marrying the worlds of sweet and savory together in delectable style.

The Cuban sandwich is done in a glamorous street-food style with roast pork, smoked ham, pepper jack, avocado, and chipotle mayo pressed on a roll, and will impress any porcine connoisseur with its range of flavors and juiciness.

The aforementioned hand-made tortillas are put to use in the delicious Tacos (one for $3, two for $5, three for $7) and are filled with such delights as Carnitas, shredded lettuce, taqueria-style avocado salsa, and queso fresco garnish; or Rajas (roasted poblano chile and sautéed onions). The resulting tacos taste as if they’ve come off your favorite taco truck, but are even fresher-tasting, and presented in Guzman’s inimitable style.

Back in Hero, the pressure is mounting as it’s getting close to opening time and there’s already a bevy of people outside patiently waiting for the doors to open. Guzman’s young protégé, Pachin Guevara, is quickly and quietly turning tortillas on the comal as she puts the finishing touches on her mise en place.

There’s not a lot of conversation, but the dance that Guzman loves is obviously underway. The rhythms and cadences between her and Guevara seem effortless, but there’s a palpable sense of urgency underlying the silence — occasionally interrupted by Guzman’s terse directives, which Guevara silently and quickly responds to. 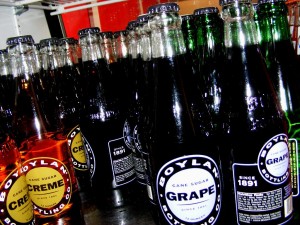 I can sense it’s time to go as opening time is nigh and the natives (and tourists) are getting restless, eager for their chance to be a Hero, so I say a perfunctory goodbye. Sheila stops what she’s doing for a moment and flashes her dazzling smile at me, wishing me well in a warm and tender way that conveys the type of sincerity that characterizes her food.
Does Sheila like to feed children (as well as everyone else)? Yes.
Does she like to make people laugh and smile? Yes.
Does she need a guru to impart some sense of shaktipat to her? No.

That sense of enlightenment comes from her end, the receiver being the customer who’s fortunate enough to have made the trek to Hero. It takes place as they take their first bite into her food, realizing for once that there’s no need to spend a fortune or resort to plastic fast-food to get gastronomical enlightenment. All one need do is Be Hero Now.

CASH OR CHECK ONLY!