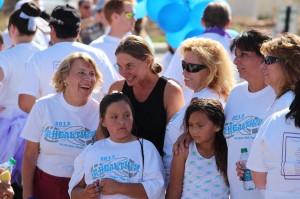 It’s about people. It’s about community. In a small town like Taos, we stick together. We are often left to our own devices out here, and so when people need help, we step up. And we also like to have a good time doing it.

On Saturday, June 7th, the For The Health Of It Walk & Fun Run will celebrate its fourth year. This is one of those events that’s a win-win for all involved. Not only are you doing something good for yourself, but you are doing something good for the community at the SAME TIME. And chances are, you know someone who will directly benefit from this event, even though you may not realize it.

The beneficiary of this event is the Taos Health System’s Cancer Support Services – 100% of the money raised goes directly to this program and is its main source of funding. One important aspect of the program is the Cancer Support Group, led by Jason Pfeifer, a Certified Co-Active Coach. Jason formed the group because, as a cancer survivor, he wanted to give back. It’s just this kind of spirit that makes our community thrive – the idea that we look out for each other. The group meets every Tuesday, 5-6pm, and is open to everyone, from patients to family, friends, or other caregivers.

One of our community members who has benefited from the support group is Judy Esquibel, also a cancer survivor (the term “cancer survivor” now applies not only to people who have been cleared or are in remission, but also to those currently in treatment). Judy first decided to attend based on the advice of her doctor. Judy has a neighbor, just 9 years old, who has been a source of support, checking on Judy and talking with her about her treatments. When Judy told her she was going to the group, little Savannah decided she wanted to attend, as well, so she went with Judy to her first meeting. As a result, Savannah has become an engaged and vocal part of the process; the benefits of the group can reach beyond support and into education. Judy told me that for her, the ability to talk about her cancer in the group, which she referred to as a kind of family, has helped her – as she said, “A lot of people are scared to talk about it, but I feel better when I talk about it.” 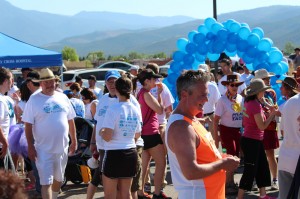 And as for Jason, the coach? “He’s super awesome,” she said. Jason has coached this group for the last four years: as long as he’s been a coach, he’s been a coach for this group. For him, the main goal is to share and support. And consistency is important to him – he wants this group to be there, even if only one person shows up in any given week, because he believes “that one person makes a difference.” One of Jason’s goals is to someday provide multiple groups, such as a patient group and a separate caregiver group. And as long as people in our community continue to be a part of events like For The Health Of It, there’s no reason he – and we – can’t get there.

The support group is just one aspect of Holy Cross Hospital’s Cancer Support Services, whose main goals are to ease stress, promote healing, and provide non-medical support services. They provide a myriad of services, the biggest one being Health Care Navigation. When someone is diagnosed with something as frightening as cancer, it can be a daunting task to know how and where to get help. They exist to answer any questions and to provide guidance whenever they can. And these services are locally funded – none of the funding comes from national groups like The American Cancer Society.

This year’s For The Health Of It is looking like it’s going to be another success. The event has grown each year, from an initial 200 participants the first year to nearly 500 last year. They are hoping to raise $50,000 this year and they’ve gotten a good start with sponsorships and registrations. Once again, there will be lots of awesome prizes, including one for Best Costume, which could be the most entertaining category for which there will be awards. And be sure to look for Judy’s Esquibel’s team, “For Grateful Judy” at the event; they will be leading the walkers.

Let’s get together, Taos, and have a little fun helping each other out! It’s how we do it.

More information on For The Health Of It: