Editor’s Note: This is the inaugural installment of a new LiveTaos column that will focus on the rules of the road, Taos-style, based on anecdotal evidence and some of the actual rules (gasp!). DriveTaos will appear every three months (i.e., in 2018 it will run in January, April, July, and October). 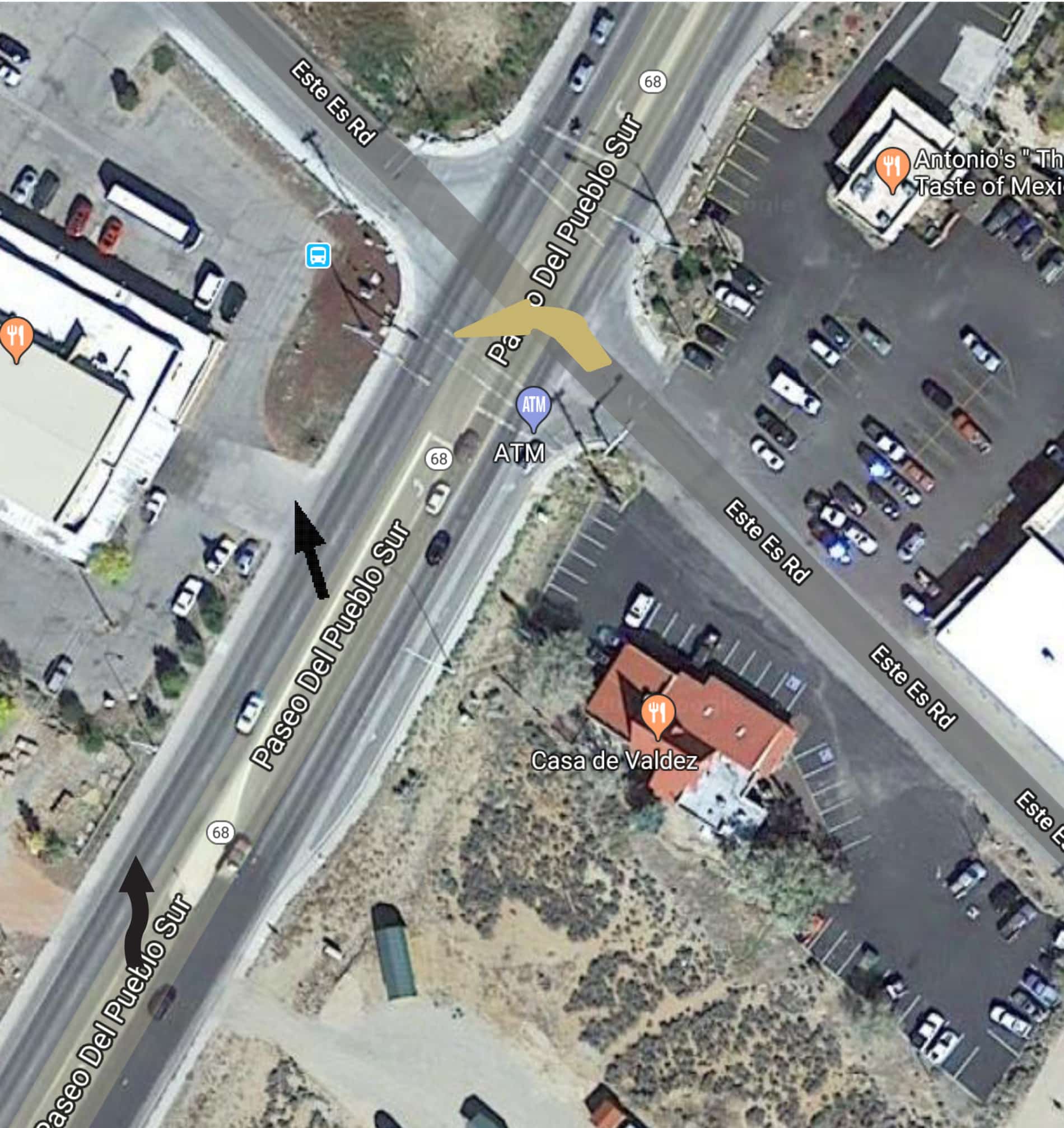 The orange-ish arrow (the author is colorblind) on the right represents the path of the author, while the black arrows on the left more or less follow the path of the errant motorcyclist. Photo illustration/Google Maps

Recently I had the opportunity to spot something so egregious, so baffling, and so illegal, that I had to laugh. At least, I laughed once I regained my composure because for a very brief moment I actually was a little bit scared.

While turning left (traveling south) onto Paseo del Pueblo Sur off of Este Es at the stoplight (see hideous Illustrator image above), I was immediately confronted by a person on a dirt bike riding toward me, going north in the southbound lanes.

It seems this person was in such a hurry to get to Guadalajara Grill — or Rosita’s or the car wash, or Diego’s Aztec Hair Salon — that he (90 percent sure it was a dude, because it was an exceptionally dumb move) decided that using the left-hand turn lane and waiting for a green arrow was just too much to bear. Instead, he opted to cut across traffic before the median started (near Floyd’s Yard) and drive for a couple hundred feet against oncoming traffic on a major state highway, before ducking into the Guad parking lot.

Mind you, this was not a high-speed maneuver; it unfolded very slowly, so slowly in fact that I nearly had to come to a complete stop to wait and watch this take place. After giving the guy the obligatory shoulder shrug with palms extended upward (which I’m sure he didn’t see, and I’m sure wouldn’t have mattered if he did), I was finally able to proceed southward at an acceptable speed, no worse for wear, but certainly confused, and bemused.

Acceptable, illegal … or both?

Not only is it highly illegal, it’s also not even acceptable by Taos standards. I don’t think I need any documentation or proof here. I’ll put the burden of proof on anyone who wants to tell me that driving the wrong way against traffic is legal; until then, let’s all assume that driving the wrong way is still illegal and that nobody is really that excited when they see it happening. But I get it, those Azteca Quesadillas sure are great! Seriously, maybe this person had a good reason to do this. Some acceptable excuses would be, “almost out of gas,” “diarrhea” or some combination of those two factors. If you are the person who made this move, and you happen to read this, send us your reason for doing this at [email protected]. I’ll allow that a third excuse might exist. 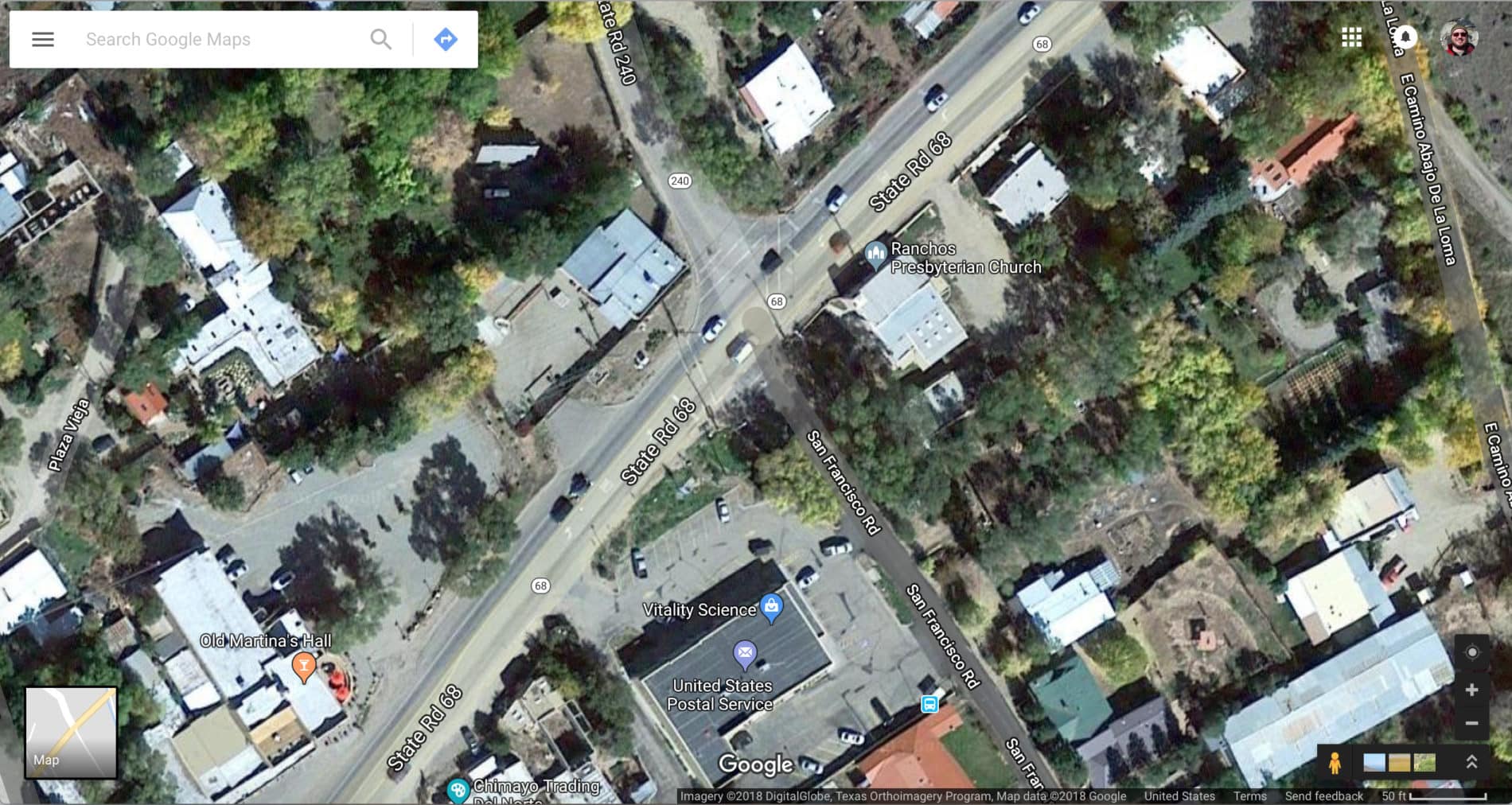 This aerial image of the intersection where NM 240 (Ranchitos) and San Francisco Road meet at NM 68 shows that the left-hand turn lane onto Ranchitos (for travelers going northeast) is clearly labeled as left-turn only. This would seem to suggest that it would not be appropriate for south-bound drivers to use that lane to enter the Post Office. Google Maps

From time to time, Drive Taos will attempt to prompt a discussion about some particularly strange, dangerous or poorly engineered road design features in our community. This month, I have to point out one that I’ve found frustrating for some time: The entrance/exit to the Ranchos Post Office off of NM 68.

What is your problem with that entrance/exit, you ask? Well, if you are driving south and decide to use this ingress, you will have to use the northbound turning lane for Ranchitos Road (NM 240), which is clearly labeled as left-turn only. This creates some interesting and seriously dangerous traffic conflicts, and is completely unnecessary, considering you can enter the Post Office parking lot from San Francisco Road, after turning safely (no matter which direction you’re coming from) at the stoplight. I’m not sure why this entrance/exit exists. At the very least, drivers should only be allowed to exit the Post Office at this spot, and perhaps even only allowed to take a right turn.

1/22/18 — ADDENDUM: Thanks to LiveTaos contributor and, apparently, reader Mel A. James for pointing out that the Post Office perpetuates and exacerbates this ridiculousness by having the diagonal parking lot stripes angled in a way that favors drivers coming in off NM 68. Surely re-striping at least one of the parking rows to favor drivers coming in off San Francisco Road would reduce some of the foolishness, right?

Editor’s epilogue: We here at Live Taos, through the act of publishing this piece, wish to promote hypocritical values and/or perceived elitist opinions about our superior driving skills, although we too have made bone-headed driving maneuvers all in the name of the perfect taco! Drive safe, Drive weird, Drive Taos.