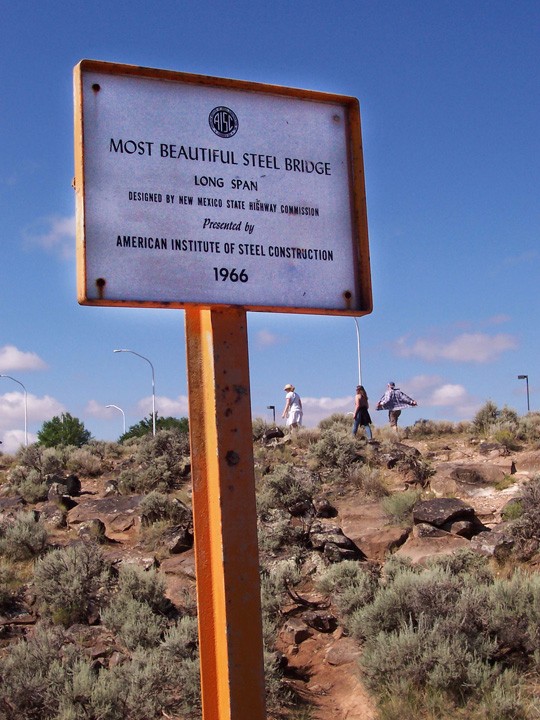 She holds up her smartphone to take a picture while her friend poses: one arm outstretched, touching the steel, a large smile as she faces southwest to ensure the looming mountain as a backdrop.  Further down, another crouches, alone, fiddling with a tripod or large lens. There is the pack in leather; their long hair whipping in the intense wind that sweeps up the gorge walls. There are the grandparents stepping out of the RV and slowly making their way to the center, and the bored teenagers who shove each other into the mostly empty road.

Before this bridge began construction in 1963, there was only one crossing, and it was farther north, deep down in the gorge and involved a rather hair-rising switchback on either side. So they built this enormous beauty of engineering. She soars across the expanse, shuttling commuters, and wowing our visitors.

Nearly everyone who visits Taos will venture to the bridge. It’s got an undeniable appeal. To stand in the middle and see the river nearly 600 feet below, flanked on either side by steep walls covered in broken lava rock, is to gasp at the enormous immortality of this stretch of earth. Long ago, godly forces ripped the land apart, creating a large scar where the Rio Grande found its way through, and runs all the way to Mexico. I have walked across many times, and found the vista to be startling to the brain. The first time, my eyes were not accustomed to seeing something of this scale, and I felt like I was moving in slow motion.

When we first moved to the area, my husband and I lived out in Carson and I would drive this bridge frequently to work in Taos. But what held my fascination more than the bridge was the people who come here. Some come to see the place where Mickey and Mallory were married in the movie Natural Born Killers, some come to see the beauty of the landscape and hopefully spot some wildlife, others still find a thrill in its dizzying height.

But it’s the people themselves that interest me. After their visit to Taos, they will go home with their snapshots and stories, but almost none will realize that they are an essential part of this landscape. They come from all over the world and briefly cross paths here, a cross-section of humanity, just enjoying the view. But without them, the bridge somehow feels lonely – cars and trucks rumble over, but there are no voices or laughter. It’s the people who bring personality and life to this hunk of steel, and I for one, welcome their presence. 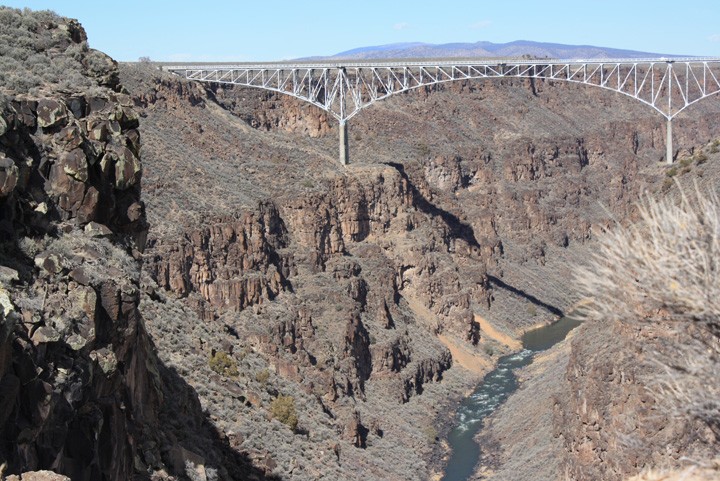