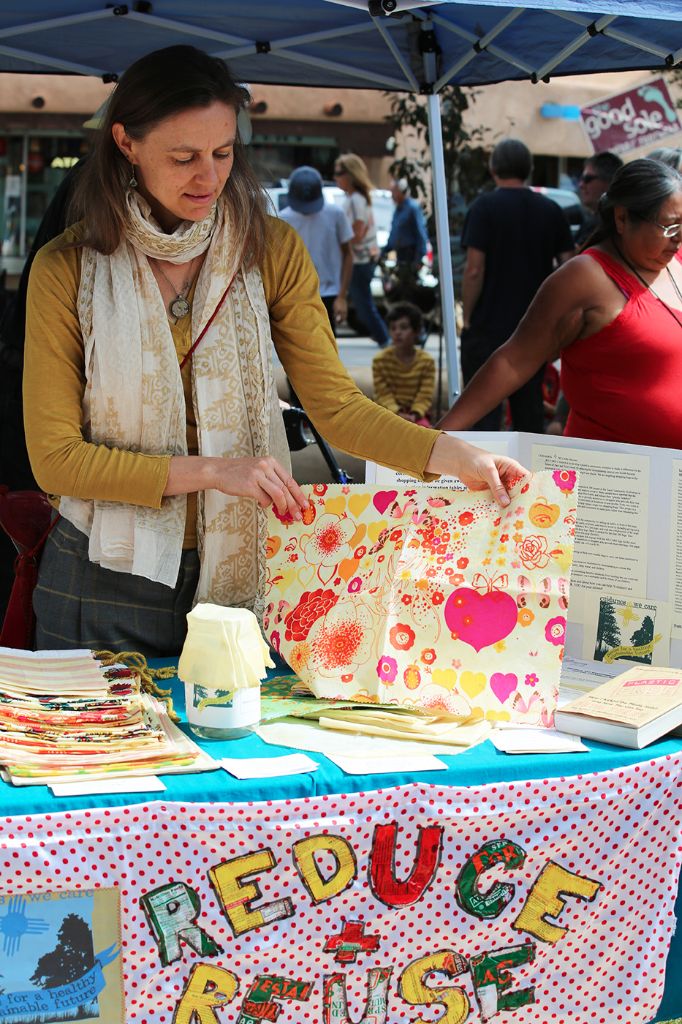 Sonya Luz Costanza is at the Farmer’s Market the first Saturday of every month.

You’ve had these words hammered into your head a hundred times, maybe a thousand…& how often, upon hearing this semi-poetic call to arms sung or spelled out on a card-table loaded with gluten-free cupcakes in front of Cid’s, do you feel like screaming: “NO, NOT ANOTHER THING TO FEEL BAD ABOUT!”  & returning home to toss all of the recycling in the trash & reach into the fridge for a cold one?

Enter Sonya Luz Costanza, with a spoonful of sucanat (if not pure white sugar) to make the message of taking just a little step towards helping the planet, go down just a little more sweetly.

I spoke with Sonya recently over tea & toast:

ALRIGHT! FULL DISCLOSURE: Sonya & I are married, but that doesn’t get you off the hook!

throatculture: In a nutshell, what’s wrong with plastic? It seems like a good thing to me.

sonya: Plastic is a good thing, it’s very durable & it will last for a very long time & in many applications it’s perfect. ‘What’s wrong with single-use-plastic?’ is more the question. Single-use-plastic is an oxymoron. You can use it once, but it will never go away. Using something that’s meant to last forever only one time is a waste of resources & is also poisonous.

slc: Plastics contain, among other things, Bisphenol A

Bisphenol A (BPA) is a carbon-based synthetic compound with the chemical formula (CH3)2C(C6H4OH)2belonging to the group of diphenylmethane derivatives and bisphenols, with two hydroxyphenyl groups. It is a colorless solid that is soluble in organic solvents, but poorly soluble in water and has been in commercial use since 1957.

Now my daddy always said; “If you can’t spell it, don’t eat it,” & I always say ‘If after looking it up on Wikipedia, you still don’t know what it is…run” You can fill in the blanks however you want, let’s get back to the bag-lady:

Endocrine disruptors are chemicals that, at certain doses, can interfere with the endocrine (or hormone system) in mammals. These disruptions can cause cancerous tumors, birth defects, and other developmental disorders.[1] Any system in the body controlled by hormones can be derailed by hormone disruptors…

DAMN! Back to the dictionary & all I wanted to do was eat my pre-packaged slice of cheesecake, throw the container into the trash &  play some Sudoku.

slc: Plastic, when it gets in the ocean is broken down by the sun & the water into smaller & smaller pieces & all of the other toxins that are in the ocean are absorbed into the plastic. For example: when you are washing dishes & you have your greasy dish-water & the last thing you decide to wash is your tupperware & you take it out & it is greasier than when you put it in because the plastic attracts all of the oils in the dish-water. In the same way pollutants in the ocean are absorbed by the plastic trash. 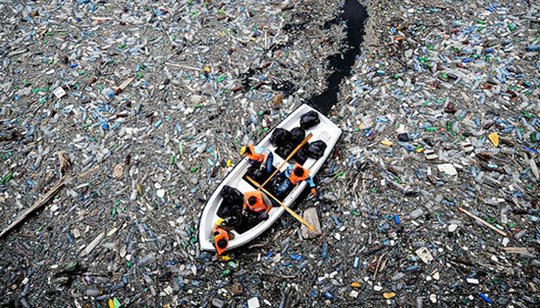 tc: That’s why I was bummed when you added a dish rag to my nice shirts in the laundry the other day. I thought the greasy dish rag would make them dirtier than when I put them in the wash.

slc: Really? Are you going to put that in the interview?

slc: We’re talking about something different. As we know there is mercury & other chemicals in the ocean & these adhere to the plastic, & eventually fish eat the plastic.

HERE is some more INFO from NPR, generally reliable unless they’re talking about Democrats

tc: The plastic is turning into giant islands? Gyres?

slc: They [the SCIENTISTS, I’m assuming] call them islands.

tc: They call them gyres, too. 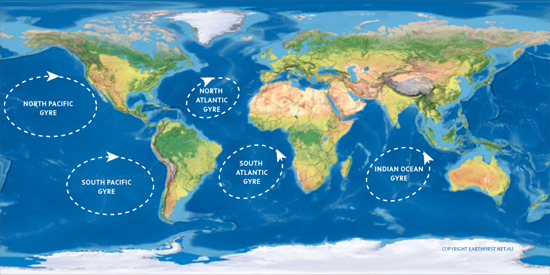 (There is a really awesome diagram of plastic & its journey to our oceans HERE …WARNING! Read AT YOUR OWN RISK! the YOU-ESS-A is among the biggest contributors to ocean garbage patches & your convenient little salad-in-a-box is gonna snarl at you from inside the fridge.)

slc: There are 5 main gyres in the Pacific & Atlantic oceans & these islands are HUGE! Some are as big as the continental United States. They are 30 feet deep!

slc: The ocean currents swirl all of the plastic trash into one place. I have read that there are 6 to 10 times more plastic particles than there are plankton.

tc: I find that hard to believe, [mutters to self: ‘six to ten times more plastic..mmmmm’…]  You are going to have to cite that one for sure.

Is there really six times more plastic than plankton in the North Pacific Gyre? Read more here from ‘the oyster’s garter:’ science served up wet & salty! 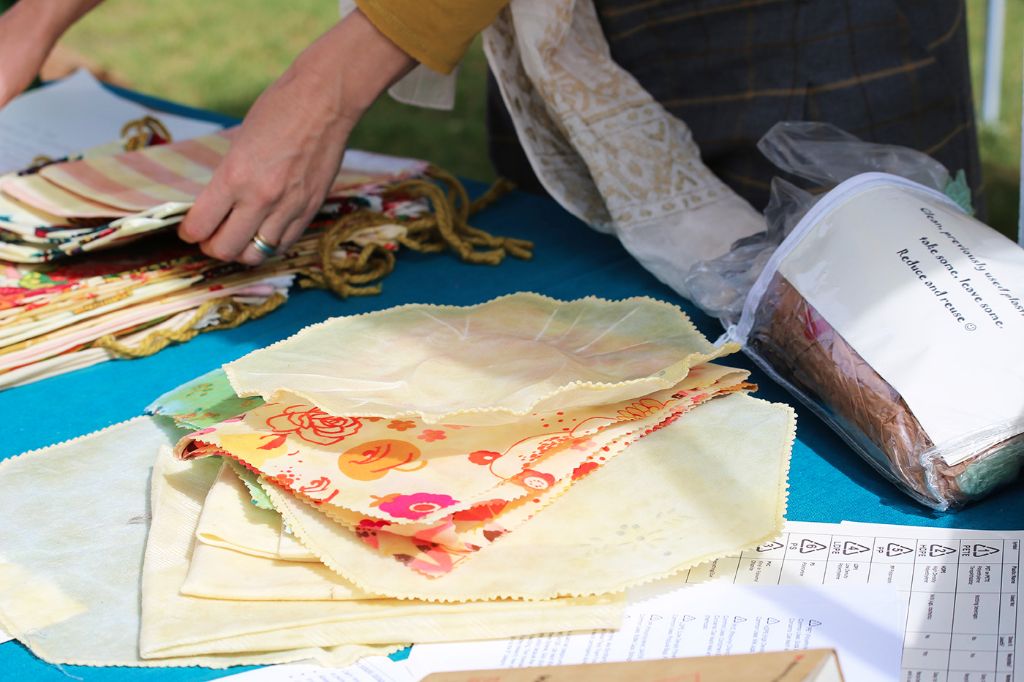 tc: Let’s get on a positive tip before I get too sad. Some cities ban plastic, what do you think about that?

slc: Banning plastic is good because it forces people to not use as much plastic as they would otherwise, but they are not really changing their habits. I’m not interested in banning plastic in Taos. I’m interested in raising awareness. Instead of the change coming from above to below in the form of a mandate, I am interested in creating the change from the ground up. So that people start to raise their awareness about plastic & make the choice for themselves. They don’t need to be told by the government what to do.

tc: You have been at the Farmer’s Market, what has your experience been like there? 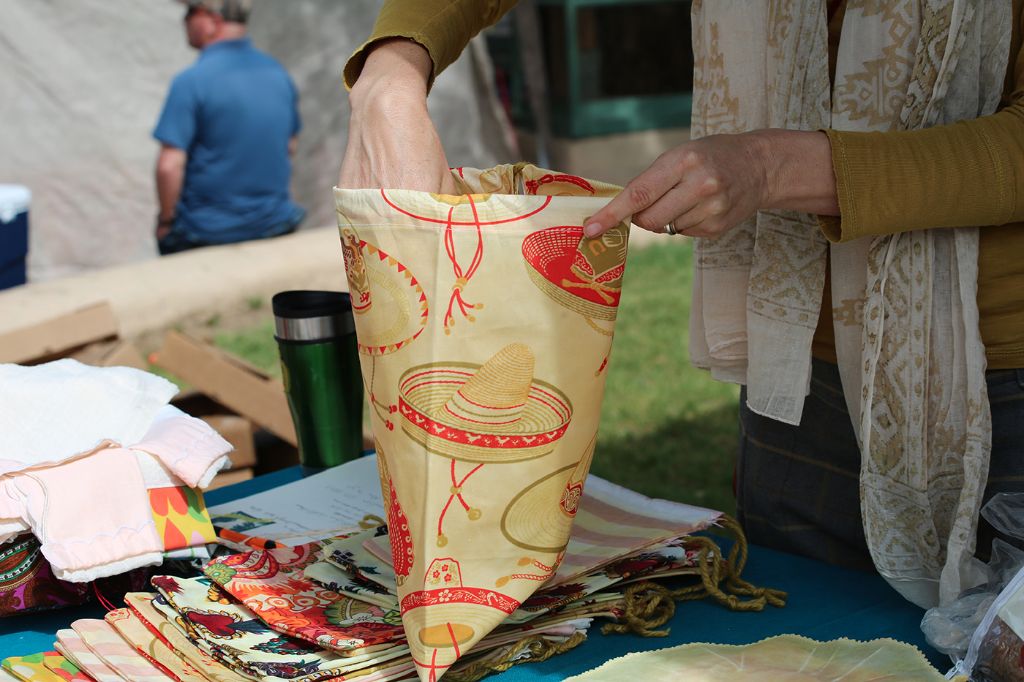 Saving the World is no excuse for not being in Style!
Sonya with bees-wax bag.

tc: How is the selling going?

slc: The selling is going well, but what is more exciting to me is that I am educating people that they don’t necessarily need a plastic bag.

tc: To put your milk in. 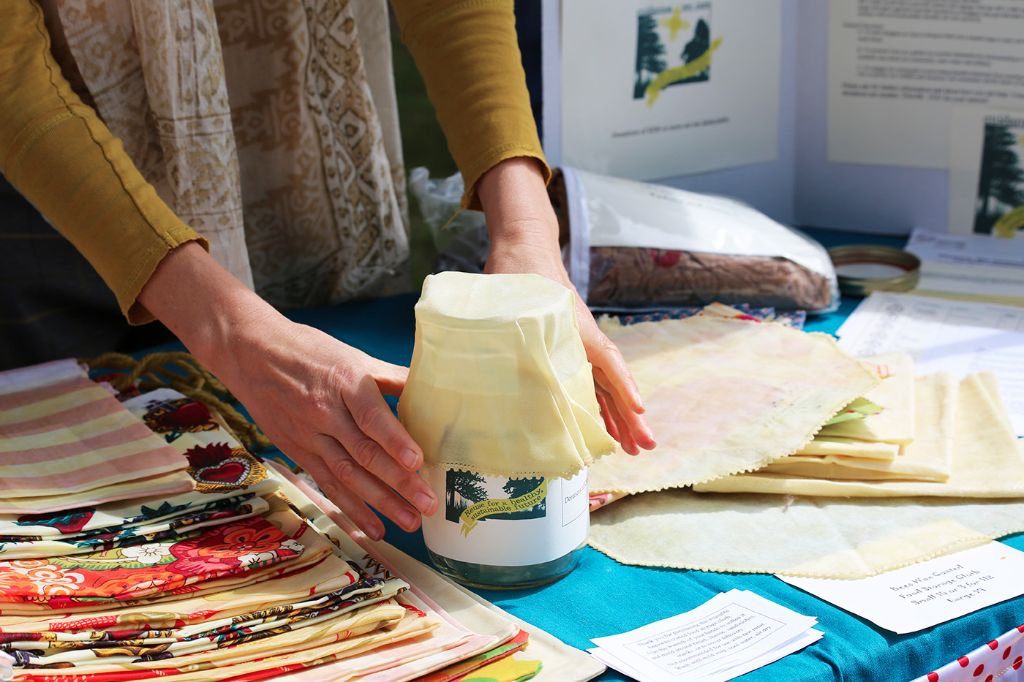 tc: They can re-use their plastic produce bags.

slc: The problem with that is as you use your plastic produce bags over & over again, they start to break down & the chemicals in the plastic can be leaching onto your produce. That is why I am advocating cotton produce bags & if you need something a little more ‘airtight’ I have the beeswax cotton bags that can keep your greens fresh longer. One day this older man came up to me & said: “Well…my wife has a whole drawer full of plastic produce bags & I don’t know what we’re going to do, the drawer just keeps filling up more & more…” & I told him: “You can re-use those bags! & stop filling up the drawer, instead of getting a new one every time you go to the market.” A simple thing like that was a revelation to him.

tc: …or their parents, our great-grandparents? Somebody did! SO, you are selling bags & giving away awareness. 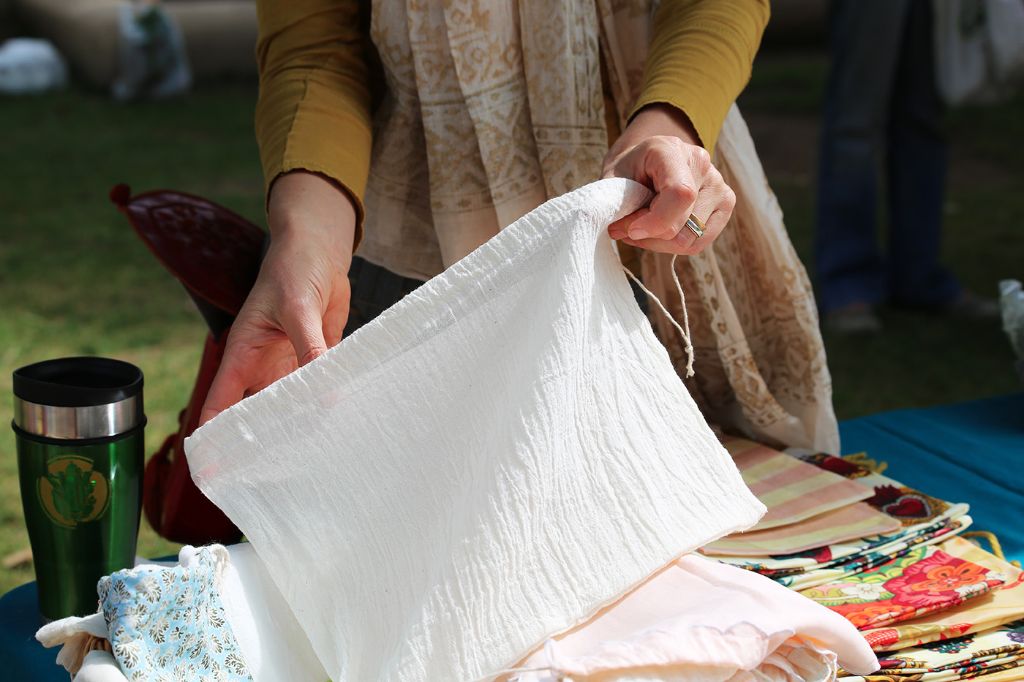 Cotton bag for things that don’t need the ‘air-tight’ treatment.

slc: Helping to remind people that; “REDUCE, REUSE, RECYCLE,” is in that order.

slc: Let me finish my sentence! Reduce is the first thing we need to do.

tc: Which means to reuse the bags.

slc: No! It means to not even use the frickin’ plastic bags in the first place. Bring your own bag!

tc: Oh! That’s BEFORE reuse. I never really thought about it.

slc: You do, you choose to not buy things that are in excessive, plastic packaging, you buy things in bulk. Use the cotton produce bags & THEN, when you can’t reduce, when you end up buying cheese in a plastic tub, you are going to reuse that plastic tub 100 times.

tc: 100 times, is that like a number people use for reusing things?

slc: It’s just a number I pulled out of my ass right now,

tc: Watch what you say! How about recycling?

slc: Recycling is a cop-out! OK, it is better than throwing it in the trash.  My favorite quote about recycling comes from the book Moby Duck:

Moby-Duck: The True Story of 28,800 Bath Toys Lost at Sea and of the Beachcombers, Oceanographers, Environmentalists, and Fools, Including the Author, Who Went in Search of Them: Donovan Hohn

slc: “We are leaving our anxieties at the curbside with our recycling.” Basically by recycling we are doing some sort of good deed, but guess what, If you did the first two: Reduce, Reuse, you wouldn’t have anything to recycle. You wouldn’t be wasting millions of gallons of water to recycle something. It is better than throwing something away but it is the LAST resort. 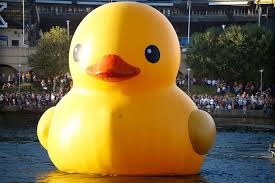 Cute, until you realize it will be clogging the Pacific Ocean for 5,000 years.

tc: Let’s end this on a positive note. What is your positive note? This is all pretty grim, when I read about the gyres I got all bummed out.

slc: The whole plastic problem is totally overwhelming & it makes us feel hopeless that there is all this plastic in the oceans & that we have produced ten times more plastic in the last decade then we have in the previous century.

slc: It totally sucks, BUT, we can’t get overwhelmed, what we have to do is just the tiny little step; & the easiest thing to do is to not use plastic bags for produce, for packaging & for shopping.

tc: You are at the Farmer’s Market the first Saturday of the month, so you will be there two more times: Saturday September 6th & Saturday October 4th. People can come & ask you questions about any of this?

slc: And if they need to get any cloth bags or beeswax coated bags afterwards, or on any other day…

tc: …don’t give out our phone number…

slc: …they can go to sonyaluz.com & contact me through there. I would like to mention that this is part of an on-going project called “CUIDAMOS: We Care.” Last summer I went to 96 stores in Taos, & out of those 96 stores I have gotten 45 to agree to give some kind of a discount or a donation to a non-profit from their shop for people who bring their own bags. I would also like people to know that when you bring your own bag to Cid’s Food Market he will donate .10¢ to the non-profit of your choice. When you shop at Smith’s & you bring your own bag will receive 5 points on your card.

tc: You can’t do it in the automated check-out, can you?

slc: I am trying to raise money so that I can give away free shopping bags at information booths in front of Wal-Mart & Super-Save & other major retail shops in Taos, to educate people to bring their own bags.

tc: You’ll be taking donations at your booth at the Farmer’s Market.

slc: Yes. I need to raise $600 to create the first 200 shopping bags with a silk-screened logo: “CUIDAMOS: We Care.” I will then give these bags away along with information on the perils of plastic at these stores.

tc: Wow! Amazing! Thank You so much for your time!

Over & Out — Another ThroatCulture mission-accomplished. One small step for Taos & the proverbial giant step for human-kind.