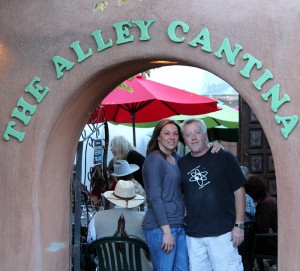 The Alley Cantina’s walls are said to be the oldest in Taos, and walking through its doors you get the feeling that the place has a colorful history. Part of the building that is now The Alley Cantina was originally built by Native Americans, and used as an outpost during the 16th century. The building has since been an office for New Mexico Territory governor Charles Bent (1799-1847), and in 1944 became El Patio, the restaurant “immortalized” by a scene in the Clint Eastwood film Every Which Way But Loose.

Buzz and Ruth Waterhouse purchased El Patio and turned it into The Alley Cantina in 1997. Since then, The Alley Cantina has lovingly received such titles as “The Best Place to Hook Up,” “The Best Happy Hour,” and “The Only Place Open After 10pm” (What more could you want!?!).

In July 2013, Buzz and Ruth sold the business to three long-time employees: Jim (security), and husband and wife Aaron (bartender) and Jessica (waitress). The selling of the business came as quite a surprise to patrons and staff alike, as Buzz and Ruth were very hands-on owner/operators — doing everything from cooking to running the door for the late-night performances of bands and DJs.

I stopped by The Alley to check in with the new owners and see how things are going:

LT: How long had the sale of the business been in the works?

Jim: It took us 16 months to get this thing together. We had to keep it a secret because Buzz didn’t want things to get too scattered before the change-over. But we’ve actually been running things now since July 1st.

Jessica: Yes, so we basically took over the operation here the day we signed the papers.

Aaron: We held a staff meeting where Buzz — you rarely see an emotional side of Buzz, but he got choked up talking to the staff. He told everyone that he had sold The Alley Cantina and he’d like to take this opportunity to introduce the staff to the new owners…

Jessica: Nobody on the staff knew what was happening or who the new owners were going to be.

Aaron: They all looked absolutely shocked and frightened.

Jessica: You could feel this sort of stillness in the room where everyone was kind of holding their breath like, “Oh shit, what’s going to happen? New owners?”

Jim: We were just sitting there with the staff like we were finding out for the first time too.

Jessica: I was hiding in the back room.

Aaron: Everyone was just looking at the door waiting to see the owners walk in, then Jim stood up and Ruth yelled, “Where’s Jessica?”, and Jessica came walking out, then people just started clapping and crying and it was just a really, really cool moment that I’ll never forget.

Jim: Now everybody pretty much hates us.

Jessica: It’s been a big transition though, because you have people that have been working next to you as an employee, and now you’re their boss. I think that it’s a great transition, but it’s also a hard transition because you look at someone differently, and there are just different responsibilities — and that goes for both sides.

LT: I can imagine it’s strange because all of sudden you’re in a situation where you have to boss your friends around.

Jessica: Exactly. On both ends it has been hard.

Aaron: Yeah, but we had a pretty good idea of what we were getting ourselves into.

LT: Tell me about what happened behind the scenes while you were working things out with Buzz and Ruth.

Aaron: We were sneaking off to Buzz and Ruth’s house for about a year and occasionally meeting with them and working out all the details. I’ve been working here for over 16 years and Jim has been here for over 12, and Jessica worked here for over 7 years before she became a nurse. We kind of had a good idea of what we were getting ourselves into — However… (Laughs) However, for the first time in our Alley careers we know what it’s like to really have to work for a living. We used to just stroll in at 6:30 at night for our shifts and leave at 2:30 in the morning and that was it. Now the phone starts ringing at about 8:30 in the morning with calls about broken-down kitchen equipment or someone who didn’t make it to work or whatever… but I personally am enjoying change, and I think we all are. 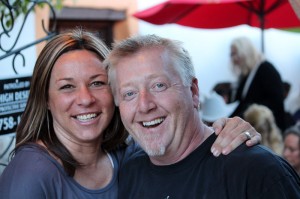 LT: So that was the biggest surprise in taking over — The amount of extra work that’s involved?

Aaron: People still say to me, “Well I’m sure you guys already knew everything that happened here, this is probably nothing,” but you had no idea how much Buzz and Ruth really did here on a daily basis.

Jessica: There’s so much that happens behind closed doors that you don’t realize until you’re in those shoes. Everything from putting the music schedules together, making sure the bands are going to show up, doing payroll, making sure the schedule is fine and the staff is here, making sure that everyone is getting paid, making sure that food is being ordered and that the electricity bill is being paid. There are so many fine details to it rather than just ‘showing up.’

Aaron: We instantly had a new respect for Buzz and Ruth and how hard they’ve actually worked over the last 17 years here. For those people who work in this industry and think, “Oh how cool that would be to own your own place and just walk in… What a piece of cake!” But there is more to it than anyone could really imagine. But things are going really well, and we’re enjoying the learning process for sure.

LT: did you have to really twist Buzz’s arm to get him to even consider letting go of the business?

Jessica: He actually approached us.

LT: Really? I always kind of pictured Buzz at 90 years old still standing behind the bar.

Jessica: I think he’ll still be a part of this place when he is 90 years old, helping us out in some way.

Aaron: Yeah, Buzz and Ruth still help us out immensely. I still talk to them practically every day of the week. They offered us something that even the lending institution regarded as a really big factor, which was that the previous owners have offered themselves in an unlimited capacity to help us out through learning the ropes — and it’s been huge that they’ve been willing to do that.

LT: Do you have any big changes planned?

Aaron: You know, we are about three months in right now and we didn’t want to try to fix something that wasn’t broken. Buzz and Ruth made a successful place here and we thought, “Let’s not jump in and wrench it all up.” There’s no need to sabotage what they’ve created here. That said, we did step into the kitchen and tweak a couple things to our liking. We wanted to put our own personal twist on the recipes for the red chile, green chile, and beans, and just to make some subtle changes.

Aaron: I’ve been behind the bar every weekend for the last 16 years and so I know what people are asking for, so I made some additions to the very first beer order that I did.

Jessica: We also added a Tortilla Soup to the menu!

LT: Do you guys have any plans to change up the music at the Alley — Changing up the type of bands you book here, or anything like that?

Aaron: We have a great local music scene here and we want to be the house that supports the local music. We sometimes book outside bands here, to varying degrees of success — the last three touring bands all canceled with very short notice…

Jim: We’ll eventually start booking different stuff, but we’ve got our core group of bands in here and people come and see them.

Jessica: It would be nice to get some different acts in here but what we have going works, and we have some great local talent here. It’s really nice to be a local bar and bring the local talent out so that people can enjoy them and they can build a following. 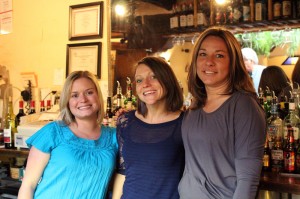