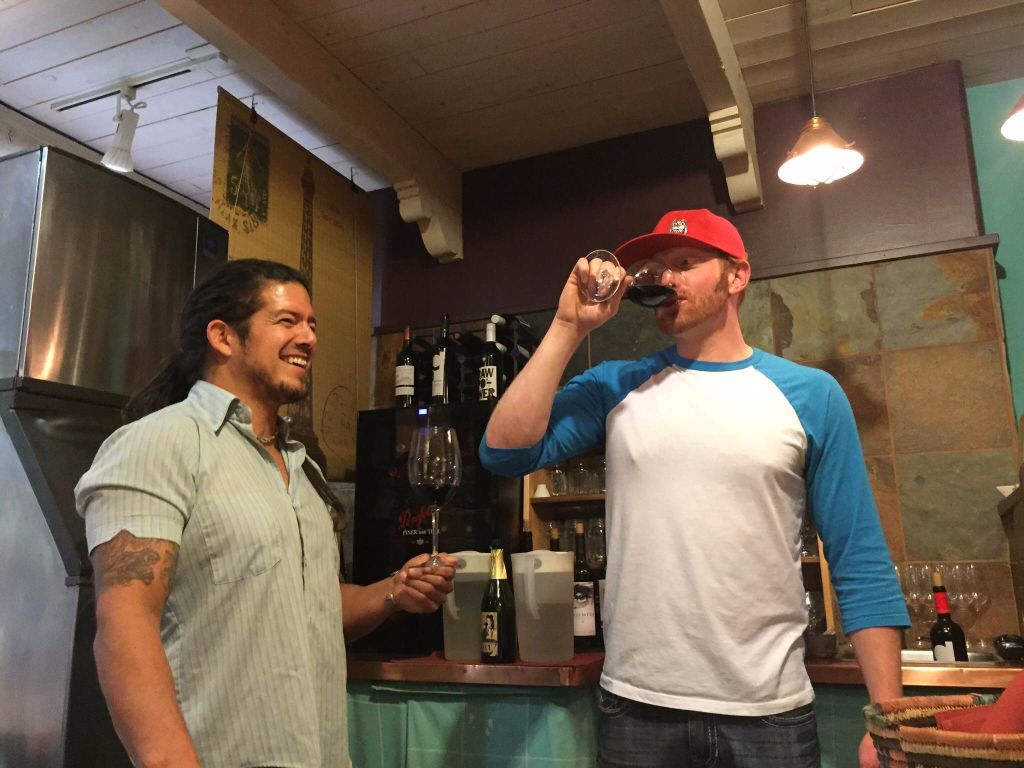 There’s nothing I love more than an amazing meal and a good conversation. When I walked into ACEQ restaurant last week and sidled up to the bar with my dining companion Scott, to my explicit delight, that is exactly what I got.

My official “assignment” for this article was to write about how ACEQ was under new ownership. My answer to you — yes it is. Michael Wagener, who was an employee of the original owners, has taken the helm. While I cannot accurately speak to what ACEQ was like before, I can tell you this — the food is locally sourced, innovatively crafted with love, and presented in an atmosphere that feels likes home. Eat your heart out Taos, literally and figuratively — it’s places like this that make us feel like we belong.

When we walked in Michael was sitting down at a table having a chat with a local over dinner. He greeted us warmly, and told us to sit wherever we would like. What happened next is a tale of magic, gastro delights, and superbly good beer, with a little bit of wine thrown in for good measure. I have to admit, giving you a blow by blow would cheapen the whole experience, but I can’t refrain from telling you some of my favorite parts in hopes that you won’t judge too harshly my ability to be easily entertained and find joy in the smallest of delights.

My favorite thing about the menu: Under the heading entrees, there are only two permanent fixtures. The rest of the fare is billed as ambiguous burger, ribs, market seafood etc., followed by this intriguing description — “We’ll discuss tonight’s preparation”.  Yes please… I love a good “discuss.” 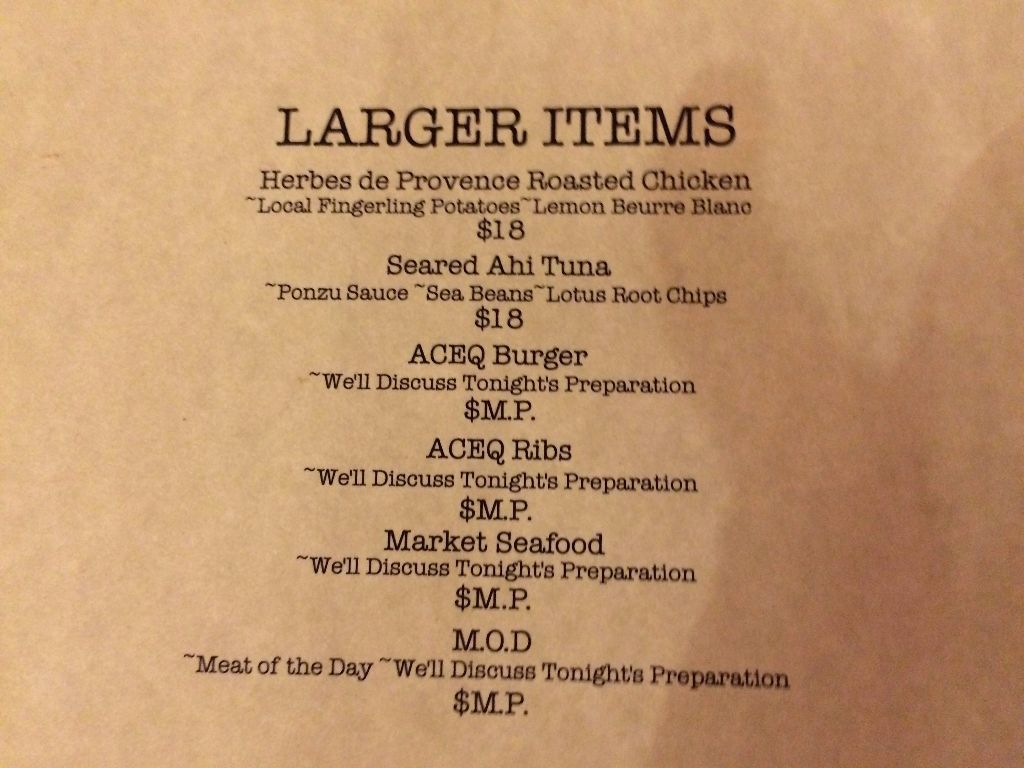 My favorite thing about the conversation: The discovery that the peppers in the kale caesar salad were mysteriously delivered to ACEQ’s doorstep after Michael and a guest had found out they hailed from the same part of Wisconsin. Those peppers were grown by the guest on his Wisconsin farm, and sent as a gift to ACEQ to incorporate into their menu.

My favorite thing about the atmosphere: The new plates hand crafted by Logan Wannamaker with ACEQ’s totem owl, which Michael has brought to a whole new level of fetish. 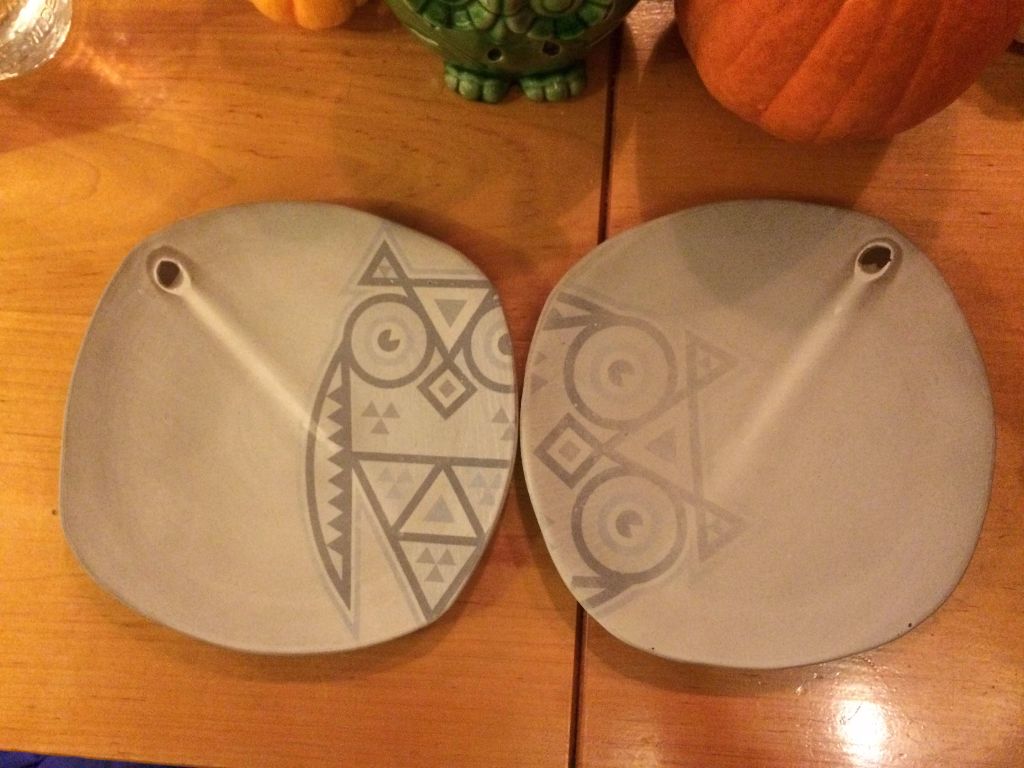 My favorite thing about the whole experience:

The vacillating couple behind us who didn’t want to interrupt our conversation with Michael, but who wanted most obviously to say goodbye to him. He excused himself, came around from behind the counter, and gave them a great huge hug. I felt like I was back in New Jersey saying goodbye to my family after Sunday night dinner.

My favorite thing about ACEQ restaurant:

Alright let’s get to the food part. This is when it comes in handy to have a dining companion. When there’s two of you, you get to sample twice as much.

Starters: We had the special Chicharron — huge crispy pieces of pork served with an over easy egg on top and house made tortilla chips dusted with chimayo red chile for dipping. The chips were cooked to perfection, the egg was deliciously runny, and the pork, well, what else can you say about bacon? Yes!

We also had the aforementioned Raw Kale Caesar. A good Caesar is unparalleled in my opinion, and while I normally find raw kale to require entirely too much chewing on my part, this was not the case, blowing the doors of my perception wide open. There was a hot debate between Scott and I about the size of the croutons. I found them delightfully chunky.

Entrees “under discussion”: I ordered the Aceq Burger which turned out that evening to be a warm meatloaf sandwich with a local tomato relish on fluffy white ass buttery grilled texas toast served with a mound of legit tater tots; the straight up frozen Ore-Ida kind that you douse with ketchup and mayonnaise to the extreme delight of the twelve year old in all of us!

Scott had a more civilized Idaho rainbow trout served atop a warm endive ruby red grapefruit salad. Two more opposite preparations we couldn’t have had. I preferred Scott’s flavor profile to mine. However, before you say to yourself isn’t that always the way, know this — I packed up half of my meatloaf sandwich and ate it cold for breakfast the next morning — Heaven!

Dessert: House-made Chocolate Cream Pie and Orange Crème Brûlée. I’d love to tell you we took pictures, but alas all I can offer you is a naked spoon and a scooped out dessert plate. When the eating’s good, there’s no time for pictures! 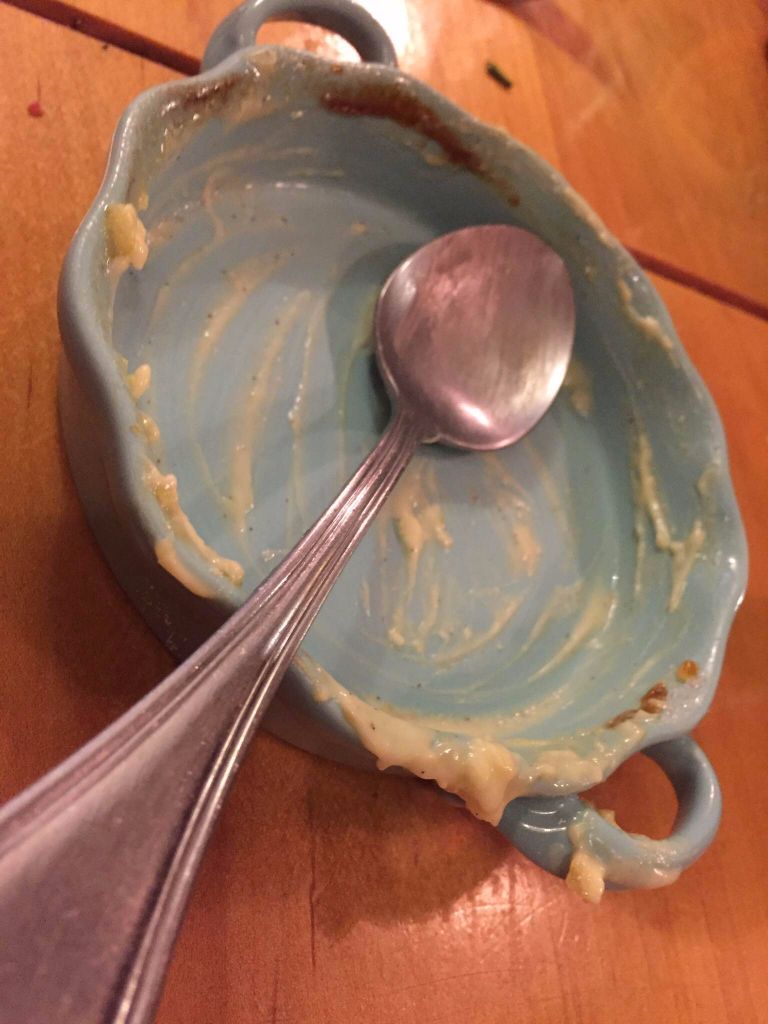 I would be remiss if I didn’t mention ACEQ’s outstanding selection of beer and wine. As you might know from previous posts, I tend to be more of a beer drinker. It was my great fortune that evening to quaff (and oh, how I quaffed) New Belgium’s craft beer series Lips of Faith seasonal Pear Ginger Ale — not only was it a treat to taste it at all, ACEQ has it on tap!

Other tasty treats that came out of the vault for sampling were a Red Rice Ale from Hitachino; gluten free, crispy, and effervescent enough to be construed as champagne.  AND, an offering from Evil Twin Brewing. I had never had the pleasure of making their brewing acquaintance before. Their well-crafted, velvety, provocatively titled  imperial brew I Love You With My Stout was a perfect companion to the chocolate cream pie and a luscious end to a perfect gastro evening.

So there it is Taos: whatever you have in mind, be it local, conversational, tasty, off-the beaten path, gourmet, or just a comfortable conversation with a friend- ACEQ restaurant has it all. What are you waiting for? Eat there! 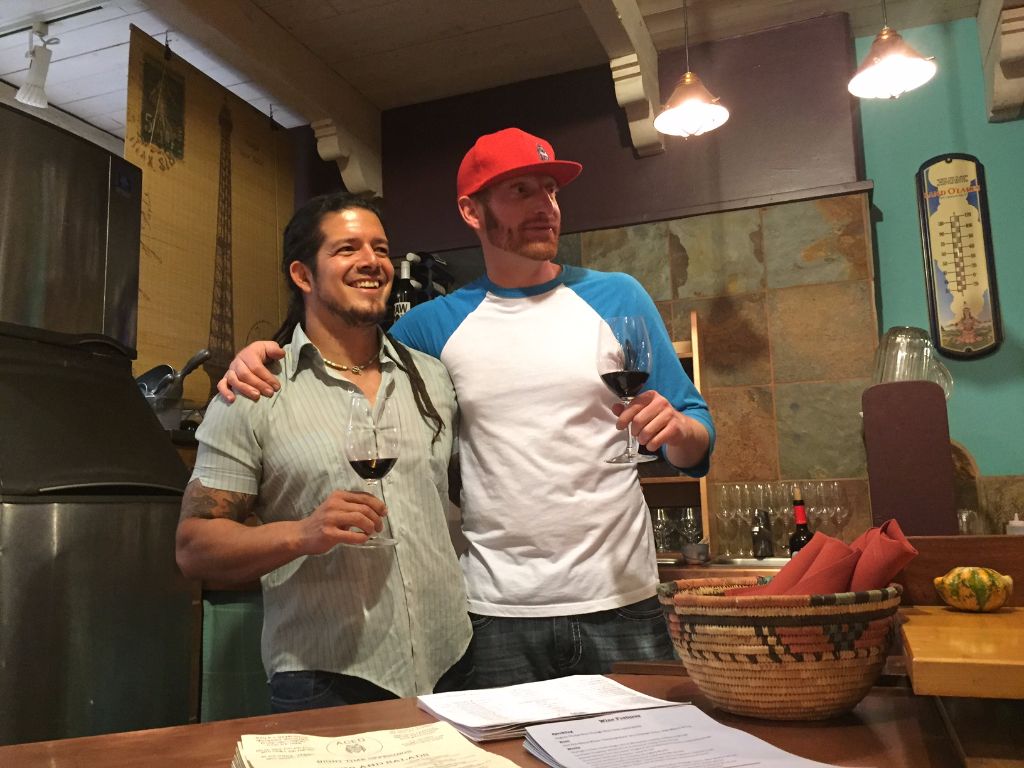