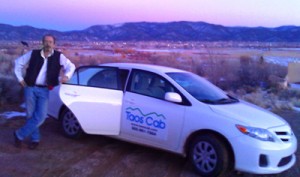 Last night, LiveTaos editors Kevyn, Sarah, Max, and Rita decided to check out the all-ages, rager-on-a-Monday Polish Ambassador feat. Liminus show at Taos Mesa Brewing (stay tuned for more on that awesomeness). Rather than brave the roads ourselves, we called up Taos’s newest most-needed service: TaosCab.

Owned and operated by Michael North, this will be Taos’ only 24-hour door-to-door cab service. (I say “will be” because it sounds like he’s technically not operating yet; but he’s all over facebook, so we assume it’s ok to write about our experience with him…)

Kevyn called at approximately 7pm — miracle of miracles, Mr. North answered the phone on the first try, winning our hearts right out of the gate — to request a 9:10 pickup. And at 9:11pm sharp (prompt, by Taos standards!) a squeaky-clean, new, white Toyota Corolla came rolling down our street. Slowly, flashers on, he parked out front and called Sarah’s cell phone to let us know he had arrived. Professionalism! Customer Service! Timing! The guy had it all.

Mr. North runs a non-metered cab — when you call, he gives you a rate, and you take it or leave it. We were quoted $18 for the trip from town (across from the northside Allsups) to Mesa Brewing — $15 flat, plus $1 for each person after the first passenger. We know that Taos audiences will recoil at the thought of paying more than $3 for anything, but let’s all be fair and honest: dude has to make a living, and anyway, $18 is way cheaper than a DUI. Or vehicular-manslaughter charges. Or, you know, death.

We chatted with Mr. North the whole ride — he has a lot to say about how difficult this has been to get off the ground, and how familiar he is with what’s happened to people who’ve tried to start cab companies here in Taos before (including, apparently, death threats from one of the competitors? can’t corroborate that, but it sounds plausible). He has a lot of plans for this cab company, including expanding into limos (although no, he doesn’t plan to get into the shuttle business, as Faust and Twin Hearts pretty much have a lock on that).

Perhaps the best idea he has brewing is a plan to work with the County to create a Safe Ride program, like Santa Fe’s CADDy. This would include a Safe Ride social network, where you can log in online and ask for a safe ride home — no dispatch necessary, thanks to the power of the internet! Some counties even use programs like this to allow people to work off their community service. Plus, all the proceeds go to a nonprofit for orphans created by DWIs — so, we really can’t see how anyone could possibly object to this. Here’s hoping Taos County can make it happen!

All in all, we’re fans of Taos Cab, and wish him the very best. Our only complaint was that the music was panned all the way to the back and turned up quite loud, so those of us who are drummers and therefore have poor hearing missed out on some of the finer points of Michael’s rant (I know, we could have just asked him to turn it down, but the guy was on a ROLL telling us of his plans for world domination — I didn’t have the heart to interrupt).

I suspect he’s going to need a lot of support if it’s to last around here, so please, spread the word. Find him on facebook!