He Said
(BY ROSS BURNS)

The second she started going on about IPAs, I knew I was wrong. And only the geekiest of beer geeks knows the beta acid levels of U.K. Fuggles and their American cousins. I confess, I may be a geek, but I’m not a beer geek. My beer chemistry knowledge is nonexistent. I was a professional beer pourer for years and I learned a lot about beer from brewers, but mostly, I just know what I like.

Ordinarily, If I were to see a smoked brown ale on a beer menu, I would pass without much thought. Some of the smoked beers I’ve had I’ve found to be much too smoky. They were more like bong water than beer. When I met Gina at Eske’s, she already had a pint of their Hotshot Smoked Brown in front of her. We both agreed it was good. I thought the smoke flavor was subtle and pleasant. Thumbs up on the Hotshot.

Overall, the entire menu at Eske’s was good. I have to say, they’ve had some beers in the last couple years that I didn’t like, but not anymore. The only beer they always have on tap at Eske’s is the Green Chile. It’s never been my cup of tea, but I don’t think anyone at Eske’s takes it personally if you politely tell them that. Still, people from across the country come in just to have a pint, or two, or three.

Eske’s upcoming new red chile chocolate stout, named Abuela, which will only be in bottles when it’s ready, had me raising my right eyebrow, but if I can change my mind on a smoked brown, I’ll certainly give the Abuela a chance. I was more intrigued by Eske’s brewer Cord Kiessling’s upcoming Hurricane Kyle, one of his project beers he names the same way NOAA names hurricane’s. Hurricane Kyle, like Hurricane Jules before it, is an American Strong Ale, but with Kyle, Kiessling has changed the hop profile a bit, as he will do with future Hurricanes.

I didn’t get the scoop on anything coming up at Taos Mesa Brewing, but I did swing by to taste what they had on tap. By the time I got there, they had just run out of the Taomato, but I got them to squeeze out a couple of ounces. Like Eske’s Green Chile, I think this one is either you do or you don’t. I get the timing of the seasonal tomatoes, but it seems more like a summer beer that’s good for a Shandy, or even mixed with green chile beer.

Another thing Gina and I have in common is we don’t like black IPAs. So, I couldn’t tell you if TMB’s Black IPA is any good. I just don’t have the taste buds for it. Aside for the “different” and “don’t like” categories, everything else was excellent, as it usually is. If they’re still on next time you go, make sure you get a pint of their Bocking A doppelbock or their Octoberfest style Dr. Okto, or both. One in each hand would be perfectly acceptable. They’re two of the best beers I’ve had there. Drink responsibly.

She Said
(By Gina Gargone)

Tis the season to drink seasonal beers — who am I kidding, anytime is the perfect time to drink beer. But seriously folks, there’s a lot of amazing brewing happening in our small mountain town. For your edification, I took one for the team, sacrificed myself, and went around to our local brew pubs and sampled them all. Not in one evening mind you, but I did indeed sample them all.

I guess you might be wondering why you should trust my opinion — I am a girl after all. A girl who drink beer and likes it. My credentials?  I solemnly swear I have not had a Miller Light since 2001. I was not, however, the only Live Taos writer to jump at the chance to write this story. Ross Burns was also looking for a good excuse to drink a couple of pints, and despite his opening comment about me only liking “girly beers,” (we have yet to clear this little matter up as to what he defines as “girly beer”) this man knows his beer.

So, if you feel safer trusting the opinion of respectable, mild-mannered, chivalrous all around nice guy, then by all means skip ahead now to the “he said”! What follows is my lady-like opinion of what’s “hopp”-ening around town.

Ross and I met to suss each other out and decide whether we were kindred beer spirits at Eske’s. Wanda and Cord rolled out the red carpet for us while we chatted and sipped. I had a pint of the Hot Shot Smoked Brown 6.4% and we sampled their other offerings on tap. I finally had a sip of their green chile beer — a Taos staple, I am told. It honestly does taste like green chiles. While I’d be hard pressed to drink a pint of it, it’s uniqueness is unparalleled. The Hot Shot Smoked Brown was more my speed — it’s got a peaty punch right out of the gate that’s mellowed by sweet caramel lingering on your tongue. A great warmer for the winter nights ahead.

Cord also talked to us about their holiday brews coming out in the next couple weeks. While they were not ready for sampling, my mouth started watering when he talked about his new brew Little Abuela — a red chile chocolate stout! Look out for that one, the light in Cord’s eyes makes me think this is gonna be a triumph. Also coming up is an American Strong Ale called Hurricane Kyle, their 10K Imperial Stout, and a spiced Holiday Cheer.

Next I took in my favorite place for beer thirty in town: the Burger Stand at Ale House or, for the lazy texter in all of us, TAH. Currently my favorite thing about the Ale House is their rotating Bosque Brewing tap. Over the course of a month I’ve tried their Scotia Scotch Ale, Imperial Pumpkin Ale (buyer beware, this one delivers a swift kick in the pants), Centennial Single Hop, and the Driftwood Oatmeal Stout. I have loved them all! Many places around town carry Bosque’s staple Lager, IPA, and Pale Ryder. When I spoke with Bobby Joe about how he manages to get so many of Bosque’s different brews he told me he likes to focus on their small seasonal batches in order to keep as many styles around town as possible. Keep ’em coming! 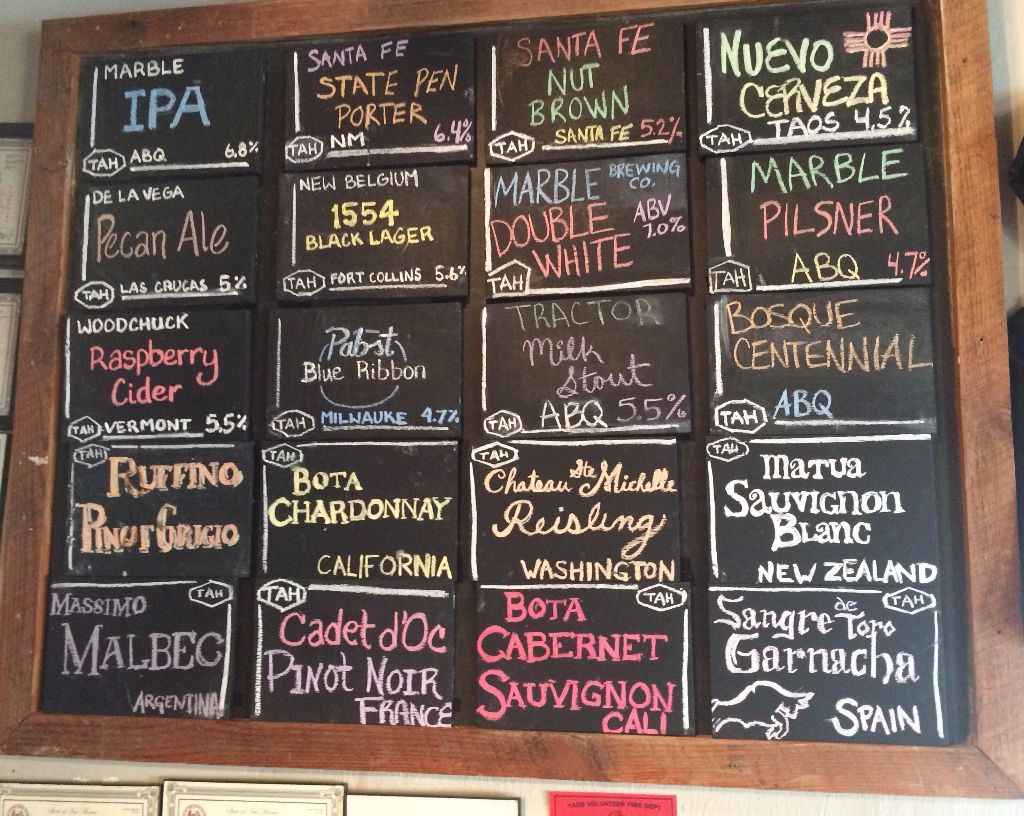 TAH is also brewing again! The official title “Nuevo Cerveza Beer Lab” is a collaboration between the Burger Stand at Taos Ale House and Nuevo Cerveza. When I asked Bobby Joe for the skinny, he let me know that they’ve got an Oatmeal Stout and an IPA working. These are extremely small batch, crafted with love and tend to go quickly. The best way to find out their release date is by following the Burger Stand on Facebook.

I love that the Ale House makes a concerted effort to showcase New Mexico brews. When I asked Bobby Joe about why it was important to him, he said that as part of the New Mexico Brewer’s Guild it’s important to support one another so everyone succeeds. I couldn’t agree more, and pledge to do my part by continuing to down tasty pints and grow fat and happy on green chile cheese fries!

Last stop for me — Taos Mesa Brewing and, I’m gonna say it, my favorite place to catch a local craft brew. They rolled out an amazing high octane fall line-up for Oktoberfest this year. Their Taomato weighing in at 10% takes the cake! It’s a bolder, crisper, ass-walloping-er incarnation of last year’s debut. Unfortunately, it’s gone so I’m totally teasing you.

However they still have the rest of their seasonals on tap and their first batch of a fantastic pilsner. Here’s the run-down:

Plateau Pilsner 4.7%: crisp and clean everything you want in an easy daytime beer that won’t inhibit your typing abilities to meet your deadline.

Bocking A 9.6%: a malty… and then I got interrupted and sucked it down without considering another adjective, so that should at least tell you it’s quite tasty!

Amidst my sampling, I got a chance to sit and have a beer with Carla, who eagerly hopped up to run back to the tanks to check out what was up next. The news she returned with was astounding, and I was extremely grateful to be sitting down and sipping a fine brew. I recommend you do the same.  No really sit your ass down or suffer the consequences…

Taos Mesa Brewing is doubling this size of their brew house!

Okay now for the bad news: their last brewing day was last weekend. They’re going dark for the renovations. Don’t panic. They’ll still have beer for the next couple weeks, and then they’ll keep you stocked up on guest brews from around New Mexico. In give or take three and a half weeks they’ll be back — bigger badder and tastier than ever. My advice: go fill your growlers!

That’s all for now, folks. Stay tuned for the next winter installment of What’s on Tap, wherein I sit down with Ross Burns and get him to tell me exactly what a girly beer is…