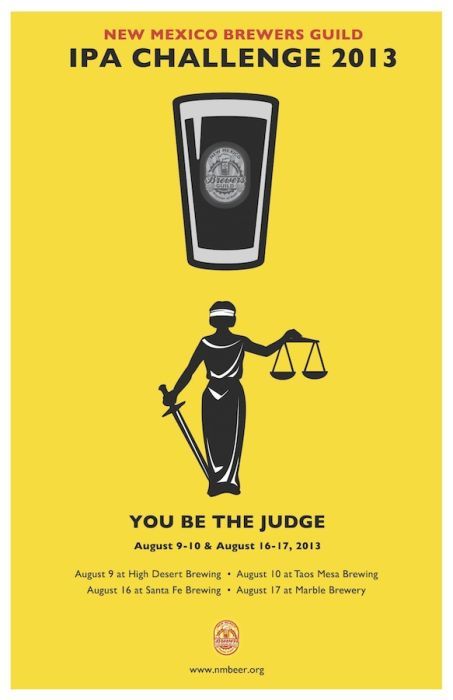 These days, in what many are calling the heyday of the craft beer movement, there are two types of beer drinkers: those who believe that IPAs are fucking delicious, and those who are wrong.

But seriously, there is just no denying the contemporary popularity of the IPA. With the powerful aroma and bitterness of hops, offering widely-varied and complex flavors, and packing an average punch of 6.5% alcohol by volume, good IPAs basically taste and feel like awesome. This is clearly no secret, as August 1, 2013 was the third annual International IPA Day, a day when craft brewers and beer enthusiasts from across the globe joined together (online and in bars) to celebrate one of beermaking’s greatest innovations (and, undoubtedly, to argue at length about its origins). And, at last year’s Great American Beer Festival (GABF), the two most-entered categories were both IPAs — American-style IPA and Imperial IPA.

So I guess you could say that IPAs are kind of a big deal. And here in New Mexico, we are fortunate to have an entire event that celebrates their glory: the IPA Challenge, a multi-day, consumers-are-the-judge, blind-taste-test, popular-vote competition among the state’s best breweries, all vying for the title of Top in the Hops.

2013 will mark the 11th Annual New Mexico IPA Challenge. Each year, multiple rounds are held in different regions of the state, and we’re hosting Round Two right here at our very own Taos Mesa Brewing, this Saturday (August 10th). Conveniently, it’s also TMB’s One Year Anniversary Celebration, with local bands Slackjaw, Square Peg, and Last to Know scheduled to play for free and drink specials and giveaways all night long – so, the perfect opportunity to host more than a dozen of the state’s best brewers for this friendly but fierce competition.

“The IPA Challenge goes back to 2002,” says Christopher Goblet, executive director of the New Mexico Brewer’s Guild. “At that time, there were very few breweries in the state. There wasn’t even an official brewer’s guild – it was a loosely-formed association of brewers who got together to drink beer.” Finally, this beard-laden group of beer makers said “Ok, let’s do a festival,” and the IPA Challenge was born.

Currently the only State IPA Challenge in the country, this festival was really ahead of the game – it got out of the gate even before the craft beer movement took serious hold of America.

This isn’t one of those fancy-judges-with-expert-palettes-only competitions, either (fun fact: in the beer world, the equivalent of a sommelier is called a cicerone). But it’s also not your standard beer festival, where you just sort of wander around and drink a bunch of different kinds of beer. The judges, while civilians, are generally real beer lovers — people who want to spend a couple hours tasting slowly and chatting about flavor profiles, hoppiness, and IBUs. “We gather up New Mexico’s finest IPAs, and make the consumer the judge,” says Goblet. The IPA is the star of the day, and the people who will ultimately pay to drink it get to decide who wins.

I ask Goblet if there’s any one brewery that everyone else is gunning for — “Il Vicino has won the last five years in a row. So everybody has their sights on them.” However, La Cumbre’s Elevated IPA took the American-style IPA Gold Medal at the 2011 GABF, so it should be a tight race all around.

This will (obviously) be the first time this event has been hosted at Taos Mesa Brewing, and head brewer Jayson Wylie is excited. “We’ve never done this before – we’re attending, participating, and hosting for the first time all in one year,” he says.

Only a year into the already-storied life of TMB, Wylie is working hard to establish Taos Mesa Brewing as a serious player on both the New Mexico and the national beer scenes. With the help of well-known local brewers Chris Jones and Max Davis, both now on board at TMB, they’ve already expanded their brewing capacity to the limit, and they’re steadily cranking out excellent beers. “We’ve streamlined things a lot – when Chris came aboard, it helped us tighten up,” he says. TMB is one of only 400 breweries that got into the GABF for this year – the festival is expecting 59,000 people.

When I asked him what TMB is putting up for the IPA Challenge, Wylie laughed. “Well, I just can’t tell you,” he said. “It’s a blind taste-test, so the breweries don’t tell in advance what beer they’re putting up.” All the kegs will arrive at TMB early on Saturday. They’ll set them up, remove the labels, and hide them – for tasting purposes, beers will simply be numbered 1 – 14. Judges will keep careful notes and cast a single ballot.

So on Saturday, show up at Taos Mesa Brewing (the Challenge is from noon to 4) with $25 and an open mind. You’ll get a ballot and 14 numbered 3 oz. pours – one from each brewery. After all four regional festivals are completed, the NM Brewer’s Guild will tally all the votes and declare a winner. The lucky brewery will keep the IPA Challenge Trophy at their venue for the year.

The challenge begins on Friday, August 9th at High Desert Brewing Company in Las Cruces. It continues Saturday the 10th up here at TMB, the following Friday (the 16th) at Santa Fe Brewing, and ends up at Marble in Albuquerque for the finale on the 17th. “All told, we’ll end up with about 500 judges,” says Goblet. 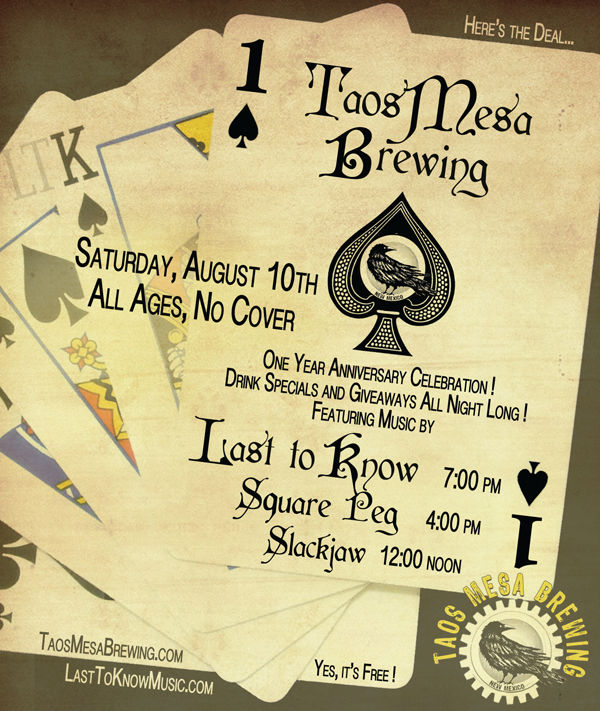 To be clear, you can also just come and hang out and watch your friends get nerdy and shwervy over delicious IPAs – you don’t have to participate in the judging to enjoy the day. Taos Mesa Brewing carries plenty of other styles of beer (plus wine and sangria) for the non-IPA drinkers in your crowd, so bring your friends and make a day of it.

After the IPA Challenge, plan to stick around at TMB for their One Year Anniversary Celebration, featuring Last to Know!

Goblet said they’ll be happy if 75 or 80 people show up at TMB – seems like a good challenge to me. Let’s get the lead out, Taos, and prove that we can judge (and drink!) beer with the best of them.