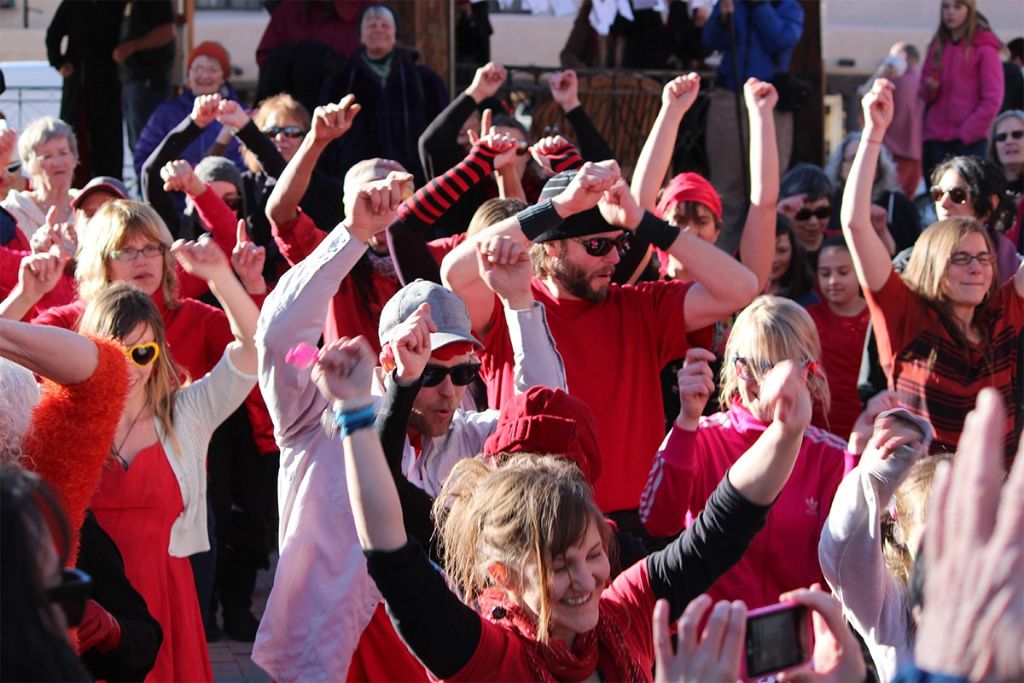 One Billion Rising is the biggest mass action to end violence against women in history. An annual worldwide revolution of body and body sovereignty, One Billion Rising is a call to action to the people of the world to rise in dance against sexual and domestic violence. Statistics say that 1 in 3 women will be raped or beaten in her lifetime, and with the global population at 7 billion, this adds up to more than one billion women and girls.

In dancing in our streets and town centers around the world every February 14th, the people of this planet come back to the scene of the crime in both our bodies and public space, two spaces women are constantly reminded are unsafe for them. In returning to these troubled places empowered and unified, we embody a new paradigm—a paradigm of emancipation, self-love, peace, confidence, respect, and community.

So many of us, especially those who are female-bodied, are socialized to always strive to be smaller than we are in every way; to be thinner, quieter, always agreeable, to even sit and carry ourselves in a way that takes up no extra space whatsoever.

It seems that most women, myself included, have been taught by both history and culture that being small is “ladylike” and attractive. We learn that attracting positive attention and “getting along” in life while in a female body relies on our ability to suppress the hugeness of ourselves. Expressive, beautiful human females are taught to lie every single day in both word and behavior about who we truly are.

The One Billion Rising movement exists to transform this socially choreographed fallacy. One Billion Rising has taught me year after year that the meaning of revolution lies in embodying one’s innate, human right to occupy space—physically, vocally—fully and fearlessly.  Inequality manifests not only in the blatancy of violation, but also in the body and behavior of those who have been told to be quiet for generations.

And so, we dance. All human beings alive today are the midwives of the extraordinary change that is afoot, and our responsibility is a big one. Rising with us is a new world of equality that we can only birth in the togetherness of a global mass revolution of both body and spirit. Every single person must take part.

This Sunday, February 14th, the Taos community will once again join hundreds of other communities around the world in dancing into a new paradigm. As I wake into another day alongside my sisters and brothers, I listen, I act, I rise.