I am a novice, an amateur. Until last weekend, I had never entered a road cycling event. I have spent a reasonable amount of time in the saddle, commuting from Arroyo Seco to Taos or putting on 20-40 miles in short day rides on the road bike, and riding trails all over the southwest and northeast on my mountain bike. I love riding, but my intestinal fortitude is questionable at times, I might talk myself out of a challenge, or whine about the little things. At least, that was the old me. I am tired of the old me.

I have an unimpressive steel road bike, that I love; the frame is red with championship stripes, a Fuji. It’s utilitarian and solid. When I first considered riding for The Taos Sports Alliance Gran Fondo event, I didn’t know what a Gran Fondo was. I was intimidated by the mere thought of riding up US Hill — could I even make it?  The idea of hauling myself to Sipapu and back was an alluring challenge, and in a year where I find myself pushing barriers I have been clinging to since I was a teenager, I thought it was a good time to put on my big girl pants and climb. After all, I would only be riding less than half as far as the bunch riding the full distance of 105 miles. Surely I could hang in there for 46. This is the third year that the Taos Sports Alliance, committed to improving quality of life in Taos County through sports and recreation development, has been bringing our Gran Fondo to the community. 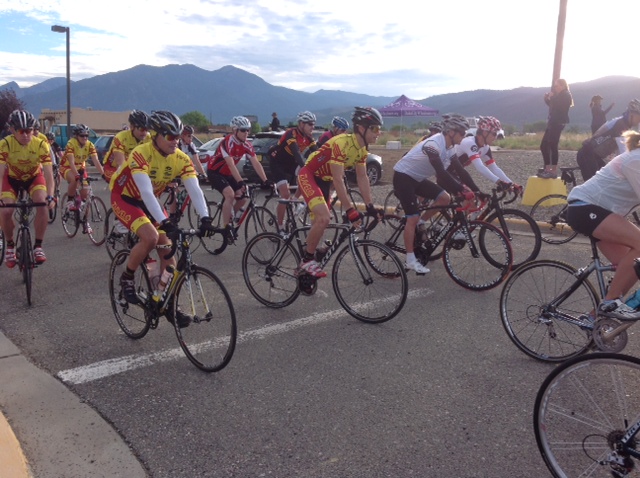 Gran Fondo events come out of France in the 80s. La Marmotte, a ride in the Alps, is the original Gran Fondo – categorized as a single day event for everyone, amateur and pro alike, usually incorporating savage climbs and descents, where one is pitted against numero uno in a personal challenge, not so much worried about overall standings. Don’t get me wrong, they are usually timed, and some folks are gunning for the title, but for many, it’s about getting out, seeing the countryside, and putting in a pretty major effort while touring the land. It’s a social ride, one often capped off with merriment and stories of the day at a local pub/eatery. There are some Fondo events across the world that attract more than 15,000 riders!

The Gran Fondo is a beautiful and rugged loop through a uniquely breathtaking experience in the Sangre de Cristo mountains, with Taos as the start and return point. The smells of the green hillsides in July, the cool mountain air across my face after the past evening’s rainstorms, the sounds of the birds along quiet stretches of highway, and the unmistakably beautiful views, kept me turning over the pedals, stroke after stroke, slowly inching closer to the turnaround of the out-and-back Micro Fondo. My knees ached, and my lower back was reminding me that it would have been smart to train for this event, or get on my bike at all this spring/summer. (I had been putting off a small repair, so the Fuji sat waiting in the shed, until a July 2 trip to Taos Cyclery where Doug fixed it up.) 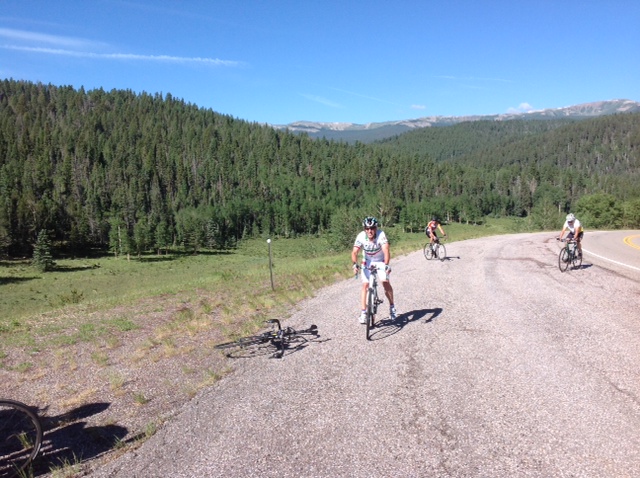 I kept plugging away, passing one rider who had fallen off her bike during the climb, and assuring myself that at least now I was not going to be the last to arrive (she was ok and already being tended by the state police officer and another rider). At the top of US Hill, at the overlook, my strong, capable husband, who had been swept up with stronger riders, was waiting for me with Fig Newtons. We began the AMAZING descent to the Rock Wall. It was the fastest five miles of my life on a bike and such a reward after that climb. The adrenaline was up and the last few miles to Sipapu were smooth, between the ache in my legs and feet. Thank you to Coldwell Banker of Taos for manning a beautiful spread of delicious snacks to help fuel the return trip. It tasted five-star to me and replenished me to ride on.

This is the point at which most of the 90+ riders kept going, to the next stop (Medio Fondo) at top of Holman Hill, and then most of those continued on to Angel Fire through Mora, then Guadalupita, passing Black Lake before the climb up Palo Flechado and the grand descent of Taos Canyon back to Taos.

My return ride was much stronger than the out. The climb time was much shorter (the hill portion was 5 miles instead of 15, but a steeper grade) and I was in step with a lovely retired Navy Pilot, John Mahoney, who was breaking a 25-year road-biking fast, on a new Cannondale, for the event. We talked throughout the whole climb and he kept me moving and not slacking into super slow pace. Again at the top, I found my mountain goat of a husband sitting in the shade. I was able to stay within sight of him, down the back of US hill, and through Talpa and back to the Taos Youth and Family Center to the finish line in just shy of four hours. If only, he said, my first half of the ride were like my second; maybe next year with some training and a little warm up before the start I will be better able to hang with stronger riders. At least I did it. And I want to do it again.

We caught up with everyone at Taos Mesa Brewing later in the day for a spread of snacks and beers! The setting at the Brewery is always awesome, with live music on stage, their beautiful patio with lawn games like horseshoes, views of the Sangre de Cristos, appetizers, and a very tasty and well earned selection of delicious craft-brewed beers. It was a great way to wind down the day.

It had been a formidable challenge for me, and I challenge all of you who like to ride but remain apprehensive to come out and at least try the Micro Fondo next year. It really was enjoyable and rewarding. The camaraderie and support made it all the better than heading out to try it solo. Thanks to the event promoters and supporters: Taos Sports Alliance, Coldwell Banker Lota Realty of Taos, Taos Cyclery, Sagebursh Inn, Friday Motors, People’s Bank, Kit Carson Electric, Taos Ski Valley, New Mexico State Police, Taos Sheriff and many more. A special thank you to Jennifer Buntz, our wonderful ride director of the Duke City Wheelmen, and all the volunteers who filled cups, set up or took down, and cheered us on. See you all out there.  I am riding the whole way next year!! 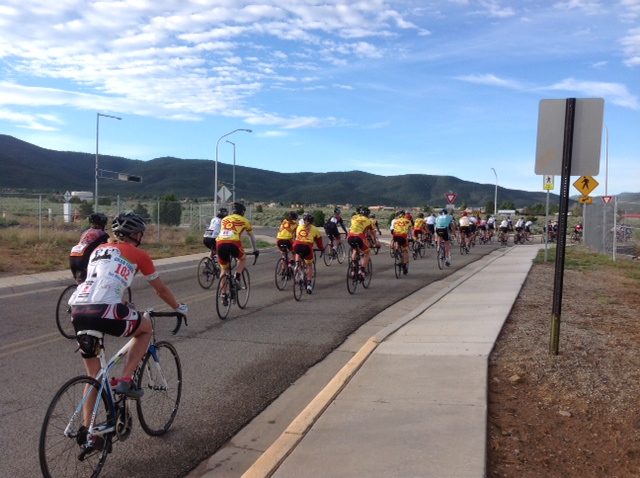