At Taos Mesa Brewing, we are committed to preserving live entertainment anyway we can. That’s why we are proud to announce TMB-TV: a live streaming platform direct from the Mothership herself. On Friday’s and Sunday’s weekly, TMB will host local artists, professionals, and community leaders on the iconic Mothership stage. While this will never replace the live Mothership experience, our production team has developed a professional platform that will stream on several apps (youtube, Twitch, FB, VIMEO). Please help support live music, local artists, and TMB’s employees by tuning in and donating at our Online Tip Jar .  The Taos Mesa Brewing team thanks you for your continued support!   Boris grew up on farms in Massachusetts. He learned how to ride horses and discovered that there was a radio playing inside his head at an early age, especially when he was running through the white pine swamps. He attended Marlboro College in Vermont for creative writing, but soon dropped out to start a market garden on one of the Elizabeth Islands near Martha’s Vineyard. In between growing vegetables he wrote songs. He met Ralph Rinzler, founder of the Smithsonian Folkways Recordings collection, in 1990. Besides getting guitar lessons from the famous musicologist, Boris drove Rinzler’s private collection of blues cylinders across the country to Ojai, California. During this journey he passed through the Southwest and fell in love with the New Mexican landscape. In 1992 Boris decided to pursue organic farming. He attended the prestigious University of California Santa Cruz Farm and Garden program and stayed on to study under Master Gardener Orin Martin. After establishing an organic farm in Sebastopol, California, he secured a Draft Animal Internship at The Howell Living History Farm, where he learned to plow with an oxen team. He moved to Santa Fe in 1996 to study permaculture techniques and to start a landscape business. In between installing landscapes he wrote songs. As time went on Boris did less landscaping and more songwriting, until he met a stuttering ex-junky punk reggae drummer from Dallas, TX, named David Bindler (Da Nu Man). David recorded Boris and challenged him to start a band and showcase his accumulated song catalog. Boris accepted the challenge and left NM in 1999 to pursue a music career in Boston. His first gig was at a dive bar on the water called The Captain Kidd in Woods Hole, MA. There he hosted an open mic and met his brilliant wife, Laura McInerney. Boris recorded his first album, Mother Ditch (2001), and started a roots-rock band with a sound that was raw, wild and different than anything folks had been used to. His songs were unique in the Americana/folk scene of Boston. His band stood out and became a sensation in the area. In 2003 the band traveled to Tucson, AZ, and recorded a phenomenal and groundbreaking album, When We Were Big (2003). The album was produced by Craig Schumacher (Niko Case) and Pete Weiss. The album was soon discovered by Dutch label Lucky Dice, and Boris and his comrades began touring Europe under the wings of Lucky Dice. During this time Boris won the Boston Music Award for Best Male Singer-Songwriter. Among the competition were Ellis Paul and Josh Ritter. At the height of Boris’s success as a renegade desert-rat folk-core roots-rocker, he decided to leave Boston and return to New Mexico. Despite his career taking off, Boris wanted to live, farm, and raise children with Laura on a traditional Spanish acequia. They moved to an off-the-grid farm on 4 acres in the Sangre De Cristo Mountains, where they had two kids. In this lost valley the newlyweds planted an orchard and Boris became the Mayordomo for 6 years. In between getting married, starting a farm, and raising children, he wrote songs. Between 2006-2013, Boris released a studio album, Wheel of Life (2010), a live album, Utrecht (2011), and a cult favorite album of Townes Van Zandt interpretations, The Songs of… (2012). To cap off the decade, he recorded an extraordinary off-the-grid album trilogy and toured exclusively with his band in Europe. Cactusman vs. the Blue Demon (2006), Bad Road, Good People (2008), and Might Crash! (2013) were all #1 albums on the Euro-Americana charts and consistently hit the Americana & Roots Top 13 in the U.S. In 2007 Boris was voted Best Singer-Songwriter in New Mexico at The New Mexico State Fair. He has also been a twice-finalist in the Mountain Stage NewSong Music Competition, where he performed live on Mountain Stage and at Lincoln Center. Boris and his songs have been heard at SXSW, The Americana Fest, Folk Alliance, The Moab Folk Festival, The Telluride Troubadour Contest, and in Utrecht, Holland, at the Blue Highways Festival. Boris has shared the stage with Ryan Adams, Iron and Wine, Frazey Ford, The Gourds, The Handsome Family, Los Lobos, Hot Tuna, New Riders of the Purple Sage, James McMurtry, Calexico, Jimmy LaFave, Howe Gelb, Stewart Staples, Dan Hicks, Slaid Cleaves, Hayes Carll, Jesse Winchester, etc., and has shared the recording studio with one of his heroes, Taj Mahal. You can hear many of his songs on successful TV and radio dramas such as Cold Case, Friday Night Lights, Agents of Shield, Saving Grace, Haven, Rosewood, and most recently on the Peabody-winning Moth Radio Hour. His latest album, I’m Here. Let Me In. is being released in 2017. Boris continues to live well, farm, raise children with his wife, prune fruit trees, and plant orchards. In between, he is writing songs. 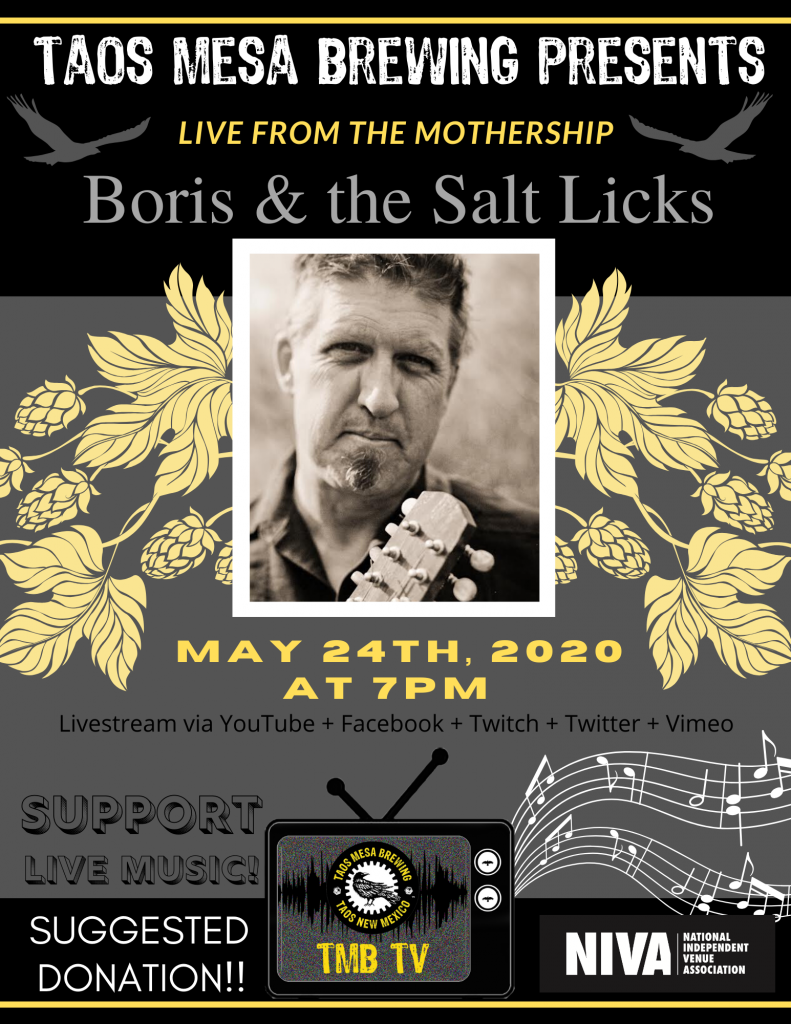