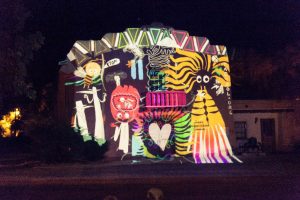 If art is the expression or application of human creative skill and imagination, producing works to be appreciated for their beauty or emotional power, then The Paseo achieved an artistic expansiveness across the senses that reached a magical level. If you were there, you know. You tasted the soup after you carved your potato, and you listened to the sounds of the combustion pulses while you smelled the gas. You felt your body floating in the light at “Filtered Transparencies,” and you shared in the whimsy of the church being transformed into an animated wonder.

As I walked up and down the road, I found myself wishing I could be in two places at once. I wanted to get back to Christina Sporrong’s installation, but I also wanted to wait in line for Debbie Long’s. I wanted to see the Robot at sunset, and I wanted to see Maki turn the Presbyterian Church into an animated beauty at sunset and for the rest of the evening over and over again.

But I also wanted to sit in the alley and listen to sounds from Ben Collins, and watch the “mudding” from Oliver Bell on the side of the Alley Cantina. All of it seemed to be too much to take in the first time around and I needed a second time to sit with it. Still, I need more time to soak in Sasha vom Dorp’s sound tube. The conversations and the excitement, the photographs, and happiness still happening after the event, speaks to the magic that happened on Friday night, to the power that art can have when it seeps into us in new ways. A few people said that it changed us, and it changed Taos. It certainly did on Friday night.

Organizers estimate 2500 people turned out for The Paseo, and people walked the mile-long stretch of installations from either end of the Taos Fall Arts Festival venues at the Kachina Lodge and the Guadalupe Gym.  Kids and adults both were dancing, listening and moving through the art installations with fascination, gazing on the creative skills and the imagination of everything from robots to crosswalks. People were happy, and everyone was talking about art. Doesn’t get any more magical on a Taos evening than that.

Social media feeds have been abundant with praise for The Paseo. Photographs, video and comments about the event have been circulating:

“The Paseo was nothing short of fantastic. Especially the Robot with Flower! Felt 9 again!” 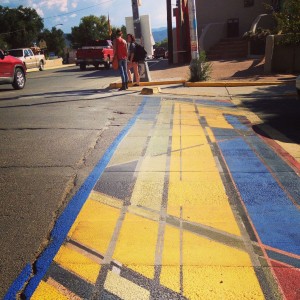 “I don’t ever remember an evening in Taos quite like Friday night.”

“Massive Thank you to Matt Thomas for an amazing evening ~ the energy was palpable!”

“Last night was awesome! It felt like art walks in a metropolitan city, but it was in the heart of Taos. Congratulations on your success and we look forward to many more Paseos!”

“THANK YOU, Thank you friends, family,  and the entire Paseo Team. WOW..what a great weekend. From an idea… to a Kickstarter campaign…to ART on the streets of Taos. I am still floating on clouds. The community turned out and a little bit of magic was made.”

“Thank you Matt for your vision and brilliant execution of the Paseo, along with all the hard-working people who helped make it such an incredible success.”

“The Paseo was AMAZING! The fabulous artists, the bountiful visitors (at every installation), the volunteers, the energy, the after-party everything was spectacular! Congratulations.”

The event itself took a a lot of volunteer hours from The Paseo Team, including the Taos Police Department, who all deserve recognition.  We look forward to more magic next year from The Paseo! 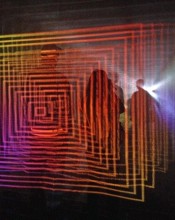 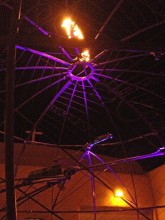